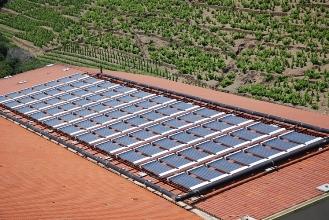 It was the first in France in the private food sector and one of the first in Europe – the solar cooling system in the cellar of the GICB winery (Groupement Interproducteurs du Cru de Banyuls) in the south of France. In 1991, successful experiences with solar cooling could rarely be found and investors, as well as donors, were hesitant to endorse the new technology. “It took a lot of work to convince Michel Jomain, former Managing Director of GICB, to get together the funds needed for this ambitious project,” French engineering company Tecsol recalls in an article published in the latest issue of its magazine, Plein Soleil. The installation was designed by Tecsol engineer Louis Casals who paid a lot of attention to minimising the risk of failure. With success! Performance data over 20 years show clearly that the system kept its promises.
Photo: Tecsol

The solar cooling installation in Banyuls is equipped with a remote control device, which allows technicians to monitor operational data off-site. This gained Tecsol 20 years of measurement data, an unusually long period for this kind of solar installation. The long-term results speak for themselves: The system has been highly reliable, requiring little maintenance work. Its performance has not decreased over the years and the only notable failure was due to a particularly violent hailstorm, which destroyed much of the vineyard and three or four of the 77 Giordano vacuum tube collectors.

The cooling system includes a roof-mounted 130 m² Cortec Giordano vacuum collector field facing south / southwest. It was set up parallel to the roof with a tilt of 15° (see photo above). The system uses a simple effect absorption chiller, type Yazaki WFC 15, with a cooling capacity of 52 kW, and a hot storage tank of 1,000 litres. The cooling tower of 180 kW is located at the north side of the building.

Three air handling units distribute the cold air to the three floors of the building. While distribution takes place on the ground floor, the bottles are stored on levels -1 and -2. The air-conditioning units work with cold recovery and the difference between input and output is around 4°C. The small differential helps to avoid a thermal shock for the stored wine.

There is no need for backup cooling. The solar system provides enough cooling for such a cellar building. The wine rack was completed in summer 1989, first without any cooling system installed. In the following two years, the cellar was monitored to determine the best operating conditions for solar cooling. Initially the system was planned to also provide heating in the winter months, however there was no heating load measured in the first years, because warm wine entering the cellar and a good insulation of the building.

The remote monitoring data which Tecsol has gathered over the years show an average annual solar net yield for the chiller of 34,000 m² between May and September of each year – including all the storage and hydraulic losses. This corresponds to a specific yield of 262 kWh/m²a. With an average thermal coefficient of performance (COP) of 0.55, the system produces 17,000 kWh of cooling energy during the summer season.

Tecsol calculates with an average cost saving of 0.5 EUR/kWh, because the GICB pays nearly 0.1 EUR/kWh for its electricity and the Energy Efficiency Ratio is 2. This adds up to EUR 850 of savings per year. The savings have to be set in relation to the power consumption of 2,800 kWh / year, which leads to annual costs of 280 EUR. This means that the electrical coefficient of performance is 6 (calculated by dividing 17,000 kWh of cooling energy by 280 kWh of electricity consumption).

The 1991 investment costs of this pilot project were EUR 150,000. The system was subsidised with a 40 % grant, which reduced private investment to EUR 90,000. Of course, the resulting payback time of more than 100 years is not what counts for a complete pilot demonstration plant. The factory has attracted the interest of the media and has been mentioned in many articles, TV reports and publications. The solar cooling system has contributed significantly to the branding of the company, which has made it pay back much faster.

This article is a short version of a text published in the French magazine Plein Soleil (http://www.plein-soleil.info) and written by Editor Jean-Louis Busquet.