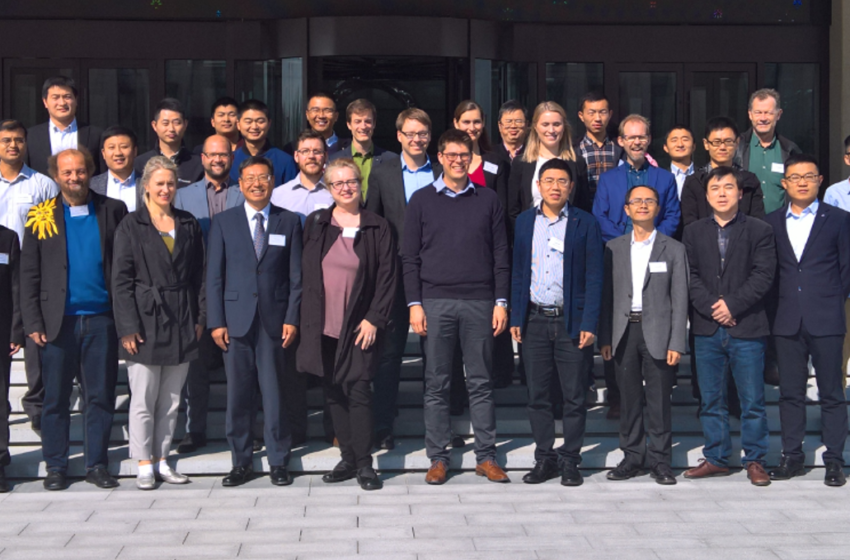 On Thursday, 15 October 2020, an online technology transfer workshop about large solar district heating networks will provide attendees with the perfect opportunity to listen to the key takeaways from four-year IEA SHC research platform Task 55 – Towards the Integration of Large Solar Systems into District Heating and Cooling Networks, which will end this year. The workshop will focus on case studies and market growth in the top four SDH countries Denmark, China, Germany and Austria. The workshop programme and other information on the meeting can be found in the attached PDF.
Photo: Task 55 meeting in Lianyungang, China
“Task 55 has been extremely fruitful. We gathered an enormous amount of know-how from frequent exchanges with research institutes and solar district heating technology suppliers based in different corners of the globe,” said Sabine Putz, Chair of Task 55 and Research Director at Austrian-based Solid Solar Energy Systems. What distinguishes this task from other SDH research groups is that fact sheets will sum up all planned Task 55 reports, making it easier for non-experts to get an overview of the findings.
Some of these fact sheets are already available on the Task 55 website: https://task55.iea-shc.org/fact-sheets. For example, CD1.1 takes a look at solar heat systems’ long-term thermal performance. When researchers working at the Technical University of Denmark (DTU) compared simulated and measured yields generated by large SDH plants in the country, they found that half of all year-to-year fluctuations in output correlate with changes in weather conditions, whereas the other half can be traced back to differences in solar circuit temperatures, collector types and control strategies, including flow rates.
Table 1: Results of monitoring the Danish SDH plants according to http://www.solvarmedata.dk. Plant-specific data can be found in the paper attached to this article.
Source: Technical University of Denmark
The researchers used publicly available data, accessible from http://www.solvarmedata.dk, to determine SDH plant performance. They found that the difference between the highest (577 kWh/m2) and lowest (313 kWh/m2) annual measurement was about 84 % between 2012 and 2016 (see table 1).
They then calculated yearly solar field performance based on weather data for six Danish regions, a mean field temperature of 60 C° and one and the same collector type in all cases. The result was more or less a 40 % difference between the highest (566 kWh/m2) and the lowest (405 kWh/m2) calculated yield (see table 2). This difference could only have been caused by weather patterns changing from year to year and location to location, since all other simulated parameters were constant. Taking into account the 84 % difference in measured yield data described above, the researchers concluded that half of all yield fluctuations are determined by factors unrelated to the weather.
Table 2: Highest and lowest yearly thermal performance between 2002 and 2010 in six Danish regions. The results were calculated using a mean solar field temperature of 60 °C.
Source: DTU
Organisations mentioned in this article:
https://task55.iea-shc.org/fact-sheets
http://www.iea-shc.org
http://www.dtu.dk
https://www.solid.at/en/news.html
https://solarthermalworld.org/wp-content/uploads/2020/09/agenda_technology_transfer_workshop_iea-shc-task55_15october2020.pdf
https://solarthermalworld.org/wp-content/uploads/2020/09/yearly_thermal_performances_of_solar_heating_plants_in_denmarkpdf.pdf