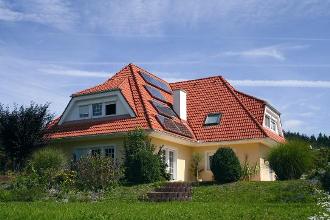 The Finnish market for solar thermal technology is still in its infancy, but could offer a worthwhile potential. The solar radiation in southern Finland is only 10 to 15 % lower than in Northern Germany and the first domestic manufacturers have already presented collector solutions which would use this energy as efficient as possible.
Photo: http://www.alternative.fi

When Xavier Noyon, Secretary General at the European Solar Thermal Industry Federation (ESTIF), held his speech at the Finnish Solar Forum in Helsinki last December, he also pointed to the total installed collector area in Finland. It amounted to only 33,000 m² at the end of 2010 – a very small area compared to most other European countries. “The Finnish market for solar thermal is very small, but still growing,” says Christer Nyman, Chairman of the Finnish Solar Energy Association (ATY). He is also the founder of consultant company Soleco Oy, which focuses on the implementation of solar energy solutions in developing countries. “We have neither incentive programmes, nor any subsidies for solar thermal or PV in Finland. Instead, there are supplements paid to oil system and heat pump owners to provide free hot water during half of the year.”

ATY was founded in 1979. The association consists of individuals, as well as small and midsized companies. Around 20 % of the members have solar thermal ties, for example, collector manufacturer Savosolar Oy, company Alternative Solutions Oy (which imports and installs collectors of the Austrian Sonnenkraft group) or subsidiaries by Viessmann, Nibe and Roth Werke. “ATY is a non-profit organisation, whose task is to make the locals aware of the use of solar energy,” Nyman says. “Once a year, we have a seminar about photovoltaics and solar thermal. The next will be at the FinnBuild trade fair 2012, which takes place from 9 to 12 October in Helsinki.”

“The awareness of solar energy among Finnish politicians is not that high. They mostly think: We don’t have enough sunshine in Finland,” Nyman criticises. “But the annual radiation in southern Finland is only about 10 to 15% less than in Northern Germany.” According to Nyman, there are two or three manufacturers of solar thermal collectors in Finland. Among them is Savosolar, which offers flat plate collectors and absorbers with direct flow design and a patented selective optical coating that received the Intersolar Award 2011 (see http://www.solarthermalworld.org/node/2945). Another innovative company in terms of collector manufacturing is Polarsol Oy, which was established in February 2009. Its stated aim is to produce highly efficient solar collectors made of corrosion-resistant steel, as well as solar energy-saving systems for the municipal and private sector.

Solar energy companies in the Finnish Satakunta region can get funding through the Centre of Expertise Programme (OSKE), which runs two solar initiatives in the region. The Finnish Centres of Expertise have been set up to facilitate the use of internationally recognised first-rate knowledge and skills as a resource in business operations, job creation and regional development. The solar projects are managed by Dr Suvi Karirinne from the Satakunta University of Applied Science. One is exclusively dedicated to PV. The other is called the Solar Forum Programme and aims at improving business conditions for companies from Satakunta which have already operated in the solar thermal or PV sector. It also supports new solar thermal or PV companies by trying to create the best and most efficient business environment possible.