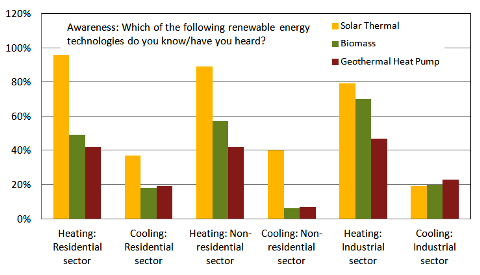 As part of EU project Fair RHC Options and Trade (FROnT), customers from the residential, non-residential and industrial sector were asked about the key points factoring into their decision on a heating or cooling system. In all sectors, solar thermal was the most widely known renewable heat technology. Among the around two-thirds of the interview partners who knew about renewable heating and cooling technologies, 96 % of the residential, 89% of non-residential and 79 % of industrial customers were aware of the opportunities of solar thermal energy. “That was a confirming result for us,” Stefano Lambertucci, Policy Officer at the European Solar Thermal Industry Federation (ESTIF), said. Awareness of solar cooling was significantly lower, especially in the industrial sector, where biomass and geothermal heat pumps received high scores.
Figure: FROnT
During the FROnT project, European trade associations AEBIOM (biomass), EGEC (geothermal), EHPA (aero & hydrothermal) and ESTIF (solar thermal) have been working together to push renewable heating and cooling technologies, partnering up with energy agencies RVO (Netherlands), KAPE (Poland), ADENE (Portugal), IDAE (Spain) and EST (UK). Other partners have been the Spanish energy consultancy Creara, the Austrian Institute of Technology (AIT) and Quercus from Portugal. The project started in April 2014 and will run until September 2016.
The report about key decision factors was one of the deliverables of the project. Each energy agency conducted the interviews in its respective country. Altogether, the survey asked 4,195 customers in the residential sector, 896 in the non-residential sector and 585 in the industrial sector about their experiences with heating and cooling technologies.
Many of the results came as no surprise. For example, what consumers associate with renewable energies is higher upfront investment, but also money saving over the system’s economic life. In general, homeowners cited overall costs, comfort levels and investment amounts as the most relevant criteria. The main criterion in the non-residential sector was reliability, followed by total economic saving. The industrial sector showed the same priority as the non-residential sector.
Solar thermal system owners more conscious about environment
Of the more than 4,000 homeowners, 94 who own a solar thermal system were selected for a more detailed evaluation and their replies were included in a presentation by ESTIF. It turned out that owners of solar thermal systems do consider environmental aspects to be more important than the group average. Whereas environmental considerations rank 6th with 61 % approval among all survey respondents, the factor is fifth on the system owner’s list (84 % approval).
Brand does matter to solar thermal consumers
Another interesting observation was that solar thermal users attribute more importance to “brand reliability”. Among all respondents, the brand of the heating system is on rank 8 with 57 % viewing it as important; among solar thermal system owners, it is on place 6 with 83 % selecting the answer. “It also turned out that solar thermal customers consider sales agents and stores to be more important in comparison to installers than we thought. These are interesting clues for market strategies,” Lambertucci said.
The main reasons for the rejection of renewable heating and cooling in general and solar thermal in particular are the initial investment and the integration into the processes or the building. Regarding industrial customers, the study confirmed that biomass is often seen as a more suitable energy source, as it better matches expectations in terms of reliability.

Share of answers to the open question “Why don´t you consider using renewable energy technologies at your house?” by homeowners from the residential sector in all five countries
Source: FROnT
Lambertucci sees those issues as a challenge to work on in the future, intending to tackle the key hurdles by offering support policies. At the moment, FROnT is in the process of public consultation in order to evaluate support schemes for renewable heating and cooling.
Websites of institutions and projects mentioned in the article:
ADENE: http://www.adene.pt/
AEBIOM: http://www.aebiom.org
AIT: http://www.ait.ac.at/
Creara: http://www.creara.es/
EGEC: http://www.egec.org/
EHPA: http://www.ehpa.org/
EST: http://www.energysavingtrust.org.uk/
ESTIF: http://www.estif.org
IDAE: http://www.idae.es/
KAPE: http://www.kape.gov.pl/
FROnT: http://www.front-rhc.eu/
NVO: http://www.english.rvo.nl/
Quercus: http://www.quercus.pt
https://solarthermalworld.org/wp-content/uploads/2016/05/front_survey_eu_-forpublication.pdf