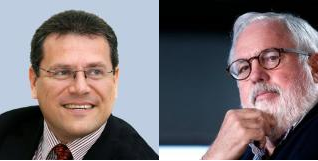 The publication of the EU Strategy on Heating and Cooling (Heat Strategy) is now scheduled for February 2016, when it will be published as part of the winter (legislative) package comprising a revised Security of Gas Supply Regulation and an EU strategy for liquefied natural gas. The Heat Strategy was supposed to be already out on 18 November 2015. The consultation process is now over and the ENER C3 unit of the Directorate General (DG) of Energy is drafting the final version. The photos show the two most important heads of European energy strategies, both with a five-year term up to 2019: Maroš Šefčovič from Slovakia, Vice-President of the European Commission and in charge of the Energy Union (left), and Miguel Arias Cañete from Spain, the commissioner for Energy and Climate Action.
Photos: EU Commission
An intense summer is behind the solar thermal lobbyists from the European Solar Thermal Industry Federation, ESTIF, during which they had several opportunities to emphasise that “the untapped free supply of solar energy in Europe is today´s biggest energy and economic waste”. “The strategy is a very good starting point for an increased decarbonisation of the heating sector in Europe and will certainly draw more attention to the urgent actions needed in the solar heating and cooling sector,” said Stefano Lambertucci, ESTIF´s Policy Officer. “We believe that this is a good opportunity for solar thermal, in particular taking into account the references to our technology in the issue papers by the commission”.
The Strategy on Heating and Cooling is a two-fold one: A shorter paper (Communication on an EU Strategy for Heating and Cooling), whose only around 20 pages are a rather dense affair of calling for action, was handed out as a draft to selected stakeholder groups. The paper differentiates between two major sectors, industry and building, with one chapter devoted to each and both including a box called “Actions planned”, which address the commission directly. Chapter 3 covers the Barriers of Financing and Chapter 4 The Way Forward. The second document will be an extensive Staff Working Document with a much more detailed analysis of barriers and market segments, although there has not been any draft available for it yet.
Intensive, informal consultation process
Since the Heat Strategy is a non-legislative document, the consultation process was mostly informal, but nevertheless very intensive. The starting point was a heating and cooling (H&C) conference on 25 and 26 February 2015, at which the commission announced their heat strategy for the first time. Four months later, another part of the consultation process took place during the EU Sustainable Energy Week in June 2015 in form of a conference on H&C in the building sector. The next important step was the publication of the five issue papers by the DG Energy in July: They will be the basis for the above-mentioned Staff Working Document. The five issue papers have the following titles and are still available online in a version from September.
Each issue paper from July included a set of questions. ESTIF submitted the attached 50-page document with answers and additional input on 3 September. The consultation process ended on 9 September with a debate among participants to gather further input on the issue papers.
Close cooperation with biomass and geothermal association
ESTIF has been part of the so-called Heat Coalition, which played an important role in putting heating and cooling on the EU agenda. Additionally, ESTIF has had good collaborations with other trade associations in Brussels, namely those representing renewable heating and cooling technologies, such as the European Biomass Association, AEBIOM, and the European Geothermal Energy Council (EGEC). All of them are united in their aim of supporting the commission in a constructive way and using the Heat Strategy to tackle as many barriers as possible. “The identified barriers similarly affect the renewable heating and cooling technologies, and most of them are also factors hindering the development of the energy efficiency sector,” ESTIF explains in the attached paper Solar Thermal Contribution to the EU Strategy for Heating and Cooling. “In cooperation with AEBIOM and EGEC, we organised several joint meetings with Member State representatives & key representatives of EU institutions,” explains Lambertucci.
Websites to associations and institutions mentioned in the article:
http://www.aebiom.org/
http://www.egec.org/
http://www.estif.org
DG Climate Action: http://ec.europa.eu/clima/index_en.htm
DG Energy: https://ec.europa.eu/energy/en
https://solarthermalworld.org/wp-content/uploads/2015/12/estif_comments_on_questions_september_2015.pdf

decarbonisationEU Strategy on Heating and Cooling