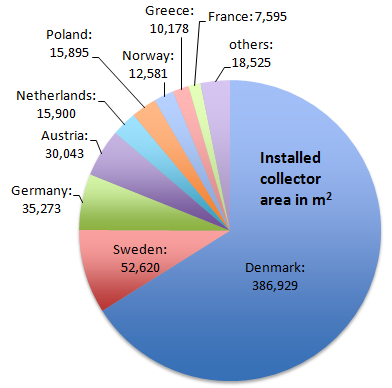 The database on Europe’s largest solar heating plants, which can be found on the EU project SDHplus website, dates back to 1997. In the meantime, it has grown to 131 solar heating plants totalling a collector area of 586,000 m² (410 MWth). The first plants included in the database were installed in 1979. 124 of 131 systems are solar heating plants, most of them for district heating (particularly those in Denmark, Sweden, Germany, Austria, Poland and France), but also for large buildings, industrial use and other applications, whereas seven are cooling installations. The database contains “close to 100 % of all plants which have a minimum thermal output of 700 kW and started operating until the end of 2013,” says Jan-Olof Dalenbäck from the Chalmers University of Technology, who is in charge of updating the database as part of the SDHplus project. Eleven of these systems, with a joint output of 22 MW, have been shut down by now. The pie chart shows the installed collector area of district heating systems broken down by country.
Source: Database on SDHplus website
As Europe’s solar district heating market is small and easy to survey, the list in the database shows almost the entire number of systems on the continent. “Regarding systems installed up to December 2013, the online database should include close to 100 % of all plants with more than 1,000 m² – more than 700 kW,” Dalenbäck confirms, and adds: “My own list includes plants larger than 500 m², and it covers maybe 95 % of all installations.” The researcher finds most plants which are added to the database by searching annual country reports or other databases, or he acquires information on them through various contacts.
Denmark accounts for 66 % of Europe´s solar district heating capacity
It comes as no surprise that among the 47 plants included in the database in total – of which 40 have been built since 2006 – is an overwhelming number of systems which were installed in Denmark. Sweden is second with 21 plants, followed by Austria (15) and Germany (14). All other countries show six or fewer systems. Denmark holds the pole position for large-scale solar fields. Of the 16 plants with more than 10,000 m² of collector aperture area, only two are not in Denmark: the Swedish Kungälv plant, which came into operation in 2000 and has an aperture area of 10,000 m², and the Norwegian Akershus plant, which went online in 2013.
All in all, things have turned out quite differently from what the European Large-Scale Solar Heating Network assumed in a brochure published in 1999 (see the attached document). In it, researchers claimed a potential of 59 million m² for large solar systems by 2015, with Germany being by far the biggest market, followed by Italy and Denmark.
Sweden was number one in early years
The database figures also allow a view of how solar district heating has developed over time: The following chart shows several peaks in the annual number of commissioned installations. The first, little peak was in the 1980s and was mostly because of Sweden’s experimental building programme. The second, bigger one was around 2000, during which eight new plants with a total area of 20,000 m² were installed in Austria, Finland, Germany, Greece and Sweden – but none of them in Denmark.
Then, the number of installations began to slow down to only one single plant added in 2005, until it rose again quickly from 2006 on, and reached its current all-time high in 2013, with 18 newly installed plants and a collector area of 119,000 m2. This time, the Danish market was the main driver, now being cost-competitive.
The beginning of the database dates back to the time before the EU, to an EC contract called DIS 1164/97 and titled European Large-Scale Solar Heating Network (ELSSHN). This contract also stipulated international workshops. After the contract ended, the database continued under joint efforts by various parties: From 2006-2009, the database was supported by the Working Group 2 of the European Solar Thermal Technology Platform (ESTTP), and in 2010, the task was taken over by the IEE SDH project. Dalenbäck updates the database every year.
More information:
Solar district heating database
https://solarthermalworld.org/wp-content/uploads/2014/11/elsshn_report_1999.pdf