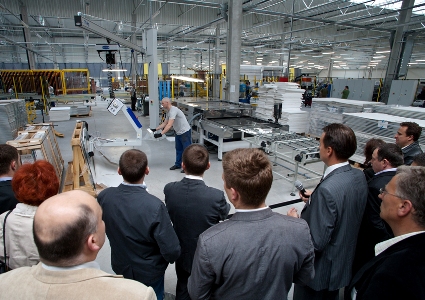 Overcapacities in the collector industry, declining demand and the associated drop in collector prices have given European manufacturers a hard time. Over the last 12 months, four well-known collector manufacturers in four different countries have had serious financial troubles: Watt in Poland, Astersa in Spain, Solvis in Germany and Clipsol in France all followed fairly different approaches to cope with their financial problems. Only one, Astersa, has disappeared from the market – the other three manufacturers are still in business. The photo shows the inauguration of Watt´s production unit in Poland in 2011 which is put on hold at the moment.
Photo: Watt
Watt, Poland: Drastically cuts staff and production
Watt was one of the market leaders in solar water heater production in Poland some years ago. As its competitors Hewalex, Sunex and Ensol, the company is based in the province of Silesia in the southwest of Poland. In its founding year in 1998, PLN (Polish Zloty) 59 million (about EUR 15 million) were invested to set up an entirely new collector factory, an office complex and two automated production lines – one for flat plate and one for vacuum tube collectors – partly subsidised by the European Union. Six years later, the company has drastically cut its staff to around ten and halted collector production for the time being. Robert Ziemniak, Sales Engineer at Watt, states two reasons for the crisis: “Public tenders were not profitable for us, because prices were so low, and the demand in the private housing sector has dropped considerably because of worsening conditions in the national support programme in 2014.” According to Ziemniak, the company is now going for exports and hopes to stabilise business earnings again next year as well as restart production. The company is run by founder and owner Sebastian Paszek alone, although the companies register shows that he gave up the status of sole owner in January 2014.
Astersa, Spain: Parent company Hunosa closes down collector producer
Astersa, located in the northern region of Asturias, filed for insolvency at the end of November 2014, when 20 people were still employed at the subsidiary. Almost one year later, in September 2015, the official receiver, Manuel María Arroyo Lemus from Spanish solicitors ProAdcon, announced that all the employees were laid off and that the company’s assets would be sold to pay off debts. Astersa had been founded in 2007 by mining company Hunosa, which invested several million euro in a collector factory with an annual production capacity of 220,000 m² (154 MWth). At the Intersolar 2008 in Munich, the company exuded confidence and had big plans regarding exports and a production of 45,000 m². Unfortunately, this was around the beginning of the financial crisis and things on the Spanish solar market only went downhill from there. Production figures dropped to 20,000 m² over the following years, with exports making up a third of the volume.
Clipsol, France: Major shareholder Engie calls for layoffs and restructuring
Clipsol, located at Aix-les-Bains in the alpine region in the southeast of France, has had several decades of experience in collector production and solar thermal system supply. In the peak years of 2008 to 2010, the company engaged 130 staff. According to an online article from 14 of July 2015 on Tecsol’s French news blog, the company’s sales volume has dropped to a fourth of its original value since 2010. Clipsol’s main shareholder Engie (former GDF Suez), which has owned 51 % of Clipsol since 2008, called for a strong restructuring of the company in July 2015. Employee numbers were to be reduced from 80 to 43. After protests by the trade union, Engie offered the staff alternative positions within the group to avoid layoffs. Clipsol’s Marketing Manager, Julien Heintz, confirmed during the workshop General State of Solar Heat in October 2015 that the company was still producing collectors, but at a low annual volume of 3,000 to 5,000 m² and that it wanted to focus now on two main sales areas: larger solar thermal systems for multi-family houses and district heating application, as well as solar PV systems for self-consumption.
Solvis, Germany: Finds investor before bankruptcy filing
German collector manufacturer Solvis has almost been as long in the solar thermal business as Clipsol, but has had a completely different corporate structure with its 525 shareholders, among them a high number of employees who invested anything between several hundred euro to half a million. Sadly, their investment is gone, since Solvis had to file for insolvency on 29 October 2015. “This step was not an easy one, but it was inevitable,” Solvis’ General Manager, Stefan Lindig, explains – as the German market has been less than half of what it was in 2008. The good news is that management had found a potential investor already before the insolvency proceedings started. “Since the bankruptcy filing was well prepared, I was able to negotiate a purchase contract with Austrian investor group Andlinger within 24 hours,” the German insolvency administrator, Peter Steuerwald, explains the unusual case. Additionally, the group of creditors was available at short notice and agreed to a partial debt cancellation, so that the sales contract with Andlinger could already be signed on 30 October. A newly founded company called Solvis GmbH with Andlinger as the only shareholder retained all employees and continued business operations at the beginning of November. The old Solvis GmbH & Co. KG was placed in liquidation.
More information:
http://www.clipsol.com
http://www.watt.pl
http://www.solvis.de