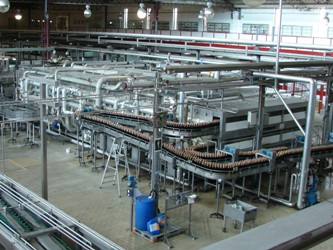 The famous beer brand Heineken has just placed an order for three big solar thermal plants that will produce the heat required for the brewery’s industrial processes at different company sites. Two of these systems will be installed at breweries – one in Valencia, Spain, and one in Göß, Austria – and one will be set up at a malting plant in Vialonga, Portugal. The photo shows beer bottles on their way into the tunnel pasteuriser at the Valencia brewery.
Photo: AEE INTEC

The systems are part of the four-year EU project Solar-Brew, which started in February 2012. The project receives EUR 2.6 million from the FP7 programme of the EU and has a total budget of EUR 4.8 million. Each of the three plants will be subsidised with 50 % of the investment costs.

The other project partners are Austrian research centre AEE Intec, collector producer and full-service company Sunmark from Denmark and international brewery equipment provider GEA Brewery Systems, Germany. The partners started their first project negotiations about one and a half years ago.

The three demonstration plants in Austria, Spain and Portugal will be at the core of the project. They will contribute especially to the key issue of subtask B of the latest IEA Task 49 on “Solar Process Heat for Production and Advanced Applications” (see http://www.solarthermalworld.org/node/3000): how to integrate solar into a process and adapt a process to solar heat.

Breweries are known to be a very good match for solar as they need a lot of low-temperature heat. Still, many low-temperature applications derive their heat from a high-temperature steam grid. To integrate solar into these processes, one first has to lower the required temperature without reducing the heat capacity in the process. Above all, this requires new heat exchanger designs.

For example, the mashing pot in the Austrian brewery has been heated by steam running through a heat exchanger on the outside of the pot. To keep the same process speed when using solar heat, a new heat exchanger has to be added on the inside of the mashing pot. In the Valencia brewery, the solar heat will be used in a tunnel pasteuriser. Similar to the brewery in Göß, the process heat is currently supplied by a steam grid. It will require several new, additional heat exchangers to integrate solar heat. Both mashing and pasteurising need an actual process temperature of around 60 to 78 °C. Solar can provide these temperatures as long as the systems are integrated the right way.

The malting plant in Vialonga will use the solar heat to dry the barley after the germination process. The drying involves hot air at temperatures rising from around 30 to 85 °C during the process. Currently, the heat comes from an external air heat exchanger, a co-generation plant and, additionally, from produced steam, and warms up the air by three heat exchangers in a row. The solar heat is to be integrated by adding a tube bundle heat exchanger between the heat from the co-generation plant and the steam heat exchanger. One challenge will be to keep the pressure loss of this heat exchanger to a minimum, so that the additional electricity consumption does not forfeit the energy savings gained by solar.