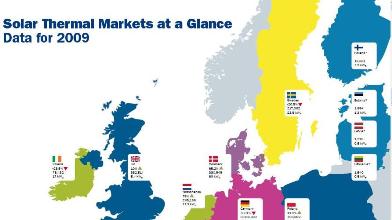 More detailed market figures can be found in this year’s ESTIF booklet: The 16-page market report is going to be published at the Intersolar Europe in Munich. For the first time, the report will include a map showing key figures as well as articles with background information on solar cooling and large solar thermal systems. Source: ESTIF

For the second year in a row, the solar thermal market in Europe had to grapple with shrinking figures in 2009: According to the annual market statistics of the European Solar Thermal Industry Federation (ESTIF), the newly installed collector area in the 27 member states and Switzerland amounted to 4.277 million m2 last year – a 10% decrease compared to the 4.77 million m2 in 2008. The slowdown is primarily due to a negative market development in Germany with -23% and Greece with -31% (see the following table). Among the six largest markets in Europe, only Austria managed to end last year with a small increase in market volume, while the others had to accept fewer investments.

However, some smaller markets, such as Hungary, Portugal and the Netherlands, were able to grow at quite noticeable rates because of their countries’ incentive programmes (see the following table). “Although there is an obvious correlation between solar thermal markets, fuel prices and economic activity, the market stability in our sector also remains highly affected by the diversified and inconsistent landscape that support policies for solar thermal technologies show across Europe,” Olivier Drücke, President of ESTIF, states in his foreword.

Europe’s fastest growing markets in 2009. Romania is not considered in this table as their market figures base on ESTIF estimations, not official statistics.
Source: ESTIF

This year’s ESTIF publication, “Solar Thermal Markets – Trends and Statistics 2009”, includes not only more key figures of each European country, but also detailed information on solar cooling and large solar thermal systems. And, for the first time, it contains a map of Europe showing the most important market figures at a glance: annual growth rates in 2008/2009, cumulative installed capacity in operation and the specific installed solar thermal capacity per 1,000 capita (see the figure above). An electronic version of the booklet can be ordered via email at info@estif.org. The printed version will be available at the ESTIF booth (Hall C1, booth C1.612) at the Intersolar Europe in Munich, from 9 to 11 June 2010.