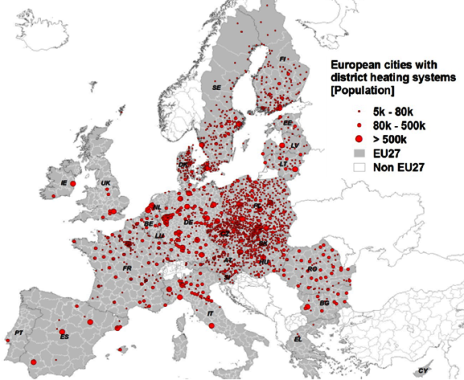 As in previous years, Denmark remained the country dominating Europe’s solar district heating market. Twenty of the 23 new and upgraded district heating plants in Europe above 350 kWth (500 m²) from the statistics compiled by Jan-Olof Dalenbäck from the Chalmers University of Technology, Sweden, went into operation in Denmark – whereas Austria, Italy and Sweden had only one each to show for. Dalenbäck’s database shows 211 large-scale district heating plants currently in operation, with combined output at 708 MW (1.01 million m²). This means that only every fourth district heating plant in Europe uses solar energy compared to the 5,400 district heating systems a database from Swedish Halmstad University lists from across the EU-27. The map shows 2,188 cities with 2,445 larger district heating systems. The highest plant densities can be found in Denmark, Poland, the Czech Republic and Slovakia.
Source: Heat Roadmap Europe 2050 – Second pre-study for the EU27 (see the attached document)
The new Danish plants from 2015 generated a total of 122 MWth (174,708 m²) at an average size of 10,277 m² each, plus three upgrades with 65 MWth. The other three systems outside of Denmark were smaller by a factor of ten: Utility Varese Risorse has been operating a 990 m² district heating plant since May 2015, whereas the most current plant in Sweden is an 850 m² installation in the town of Lerum, and in Vienna, energy provider Wien Energie (formerly Energiecomfort) is operating a 1,500 m² plant in a new housing area on the outskirts of Austria’s capital. Dalenbäck has regularly updated his database on large solar heating plants above 350 kWth for several years as part of the SDHplus project, which just received an extension for another three. His list shows a total of 252 plants in operation (see the table below).
Summary of the database created by Jan-Olof Dalenbäck, mainly including solar thermal systems above 350 MWth in operation for district and block heating in Europe.
“To my knowledge, there is no common definition of district heating, so my database includes large solar heating systems for different applications,” Dalenbäck explained. The majority of the systems in the database, however, either belong into the category of district heating, called Fernwärme in Germany and Austria, Fjärrvärme in Sweden and Fjernvarme in Denmark (36 %), or block heating, which is called Nahwärme in Germany and Austria or Närvärme in Sweden (48 %). Block heating stations include a heat-only boiler or sometimes a small CHP plant.

Different ways of feeding heat into the grid: The figure on the left shows a centralised solar field, which is connected either to a large combined heat and power plant (district heating) or a heat-only boiler station (block heating); the figure on the right shows a distributed solar field connected to a subsection of the heating network. Both figures were taken from the attached presentation.
Source: Chalmers University of Technology
The Swedish researcher also explained that there are different ways of feeding the heat into the network, something that also depends on the country as shown in the following list. In Denmark, most of the large solar plants are connected to a central heating boiler or CHP (central heat and power). In Germany and Sweden, the majority of large solar plants are integrated into block heating plants. In Poland and France, larger solar installations are connected to the secondary heating circuit, meaning that several collector fields adding up to 350 kWh or more are mounted onto buildings and connected to different subsections of the heating grid.
“Besides Denmark, there has been no worthwhile market development for large systems in any other European country the last years,” Dalenbäck concluded after looking at the overall statistics of his database (see chart below).

Overview of 252 large-scale solar thermal systems in operation, plus 18 closed-down plants with 25.5 MW (white), based on starting date (x axis) and country (colour). The numbers were taken from the statistics of Jan Olof Dalenbäck from the Chalmers University of Technology in Sweden. The Danish red dominated new installations over the last four years, from 2012 to 2015.
Germany and Spain: First showcases expected in 2016 after longer break
And what is the outlook for 2016? Denmark will certainly dominate the statistics this year again, considering that the country has projects in the pipeline totalling a solar thermal capacity of around 350 MWth (500,000 m²), according to a November 2015 presentation by Jan Erik Nielsen from Danish consultancy PlanEnergi. Germany, however, will show signs of life in the solar district and block heating market, after two years without any larger solar installations coming into operation: There is the district heating plant in the town of Simmern with 1,422 m², which had already been completed at the end of 2015 and which will start producing energy no earlier than summer 2016 because of the delay in the construction of the heating centre. Additionally, there were the announcements of two other solar district heating projects: Senftenberg with 8,300 m² and Chemnitz with 2,000 m². Spain could also get its first showcase for large district heating since 2007 with an installation in Barcelona. According to CEO Àngel Carrera, Spanish engineering company Aiguasol is looking to finance around 4,000 m² of collector area which would feed into the biomass-supplied network La Marina run by Ecoenergies Barcelona.
Websites of companies, institutions and projects mentioned in the article:
Chalmers University of Technology: http://www.chalmers.se/en
SDHplus: http://solar-district-heating.eu/
Aiguasol: http://aiguasol.coop/en/
Overview of Denmark solar heating plants: http://www.solvarmedata.dk/
PlanEnergi: http://www.planenergi.eu/
Savo-Solar: http://www.savosolar.fi/en/
https://solarthermalworld.org/wp-content/uploads/2016/04/heatroadmapeuropepre-studyii20130524.pdf
https://solarthermalworld.org/wp-content/uploads/2016/04/solar_district_heating_webinar_march_2016.pdf