The European Parliament is planning to vote on a revised Renewable Energy Directive next February. About 1,300 amendments had been submitted until July 2017 related to the first draft of the revised directive from November 2016 (see attached document). The amendments are currently discussed by the members of the ITRE (Industry, Research and Energy) Committee. The main task of José Blanco López (see photo), a Spanish ITRE member and the rapporteur of the Directive draft, is to reach an agreement on the so-called compromise amendments. They are to represent the shared view of the committee, so that the directive can secure enough support in parliament. Its members are scheduled to vote on these ITRE amendments on 28 November and the solar thermal industry is looking to ensure that the solar thermal sector isn’t being left out of the loop.
Photo: www.europarl.europa.eu
The second attached document contains all commission amendments and alternative proposals by López. The most important change to heating and cooling regulations can be found in Article 23, which will require member states to increase their renewable share in the thermal sector by 1 % each year (see p. 40, amendment 68). The chart below was created by the European Geothermal Energy Council and shows that recent developments (2004 to 2014) have made the growth target in renewable heat production seem less ambitious than it should have been. Some EU countries had already exceeded the 1 % threshold during the previous period. Meaningful change, however, could be implemented by raising it to 2 % – an opinion shared by all renewable heating associations in Brussels. López included the new figure in his report and submitted it as part of his amendment report to the ITRE Committee for discussion. 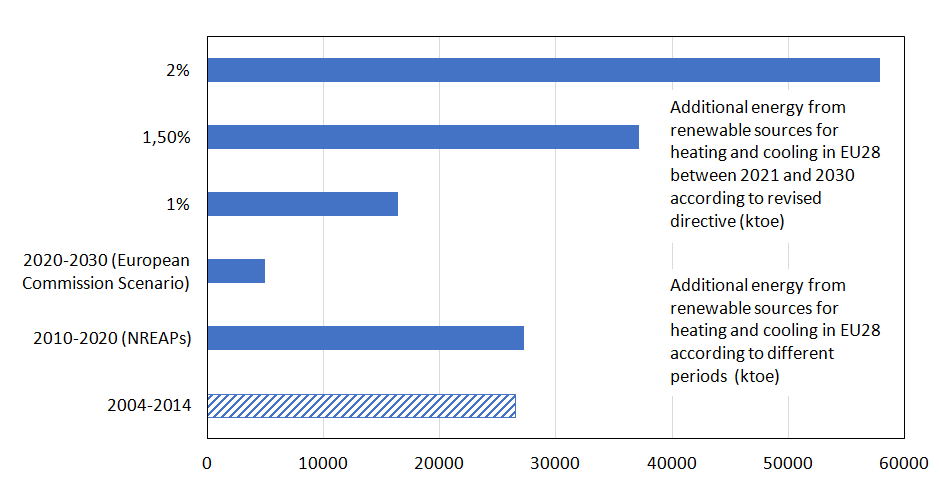 Additional renewable energy production in heating and cooling: The 1 %, 1.5 % and 2 % annual increase scenarios from the revised directive are being compared in this chart to the period from 2004 to 2014 and the National Renewable Energy Action Plans (NREAPs), which cover 2010 to 2020. The reference case is the European Commission Scenario in the middle.
Source: European Geothermal Energy Council
The changes to Article 23, however, may not have the desired impact on the solar thermal sector. They make only broad reference to renewables in the thermal sector, allowing countries to comply with the requirements by promoting electricity-based renewable heat.
Stefano Lambertucci, Senior Policy Officer at Solar Heat Europe (formerly ESTIF), prefers to look on the bright side: “This obligation is such an innovative concept in the thermal sector that it could give anyway new impetus to renewable heat markets.” Still, he emphasised that “several groups within the European Parliament have been trying to weaken the provision. They intend to get either a watered-down version of the text or a lower annual increase.”
He added: “It will be crucial to prevent fossil fuels from being considered as renewable heat options. This can be done by establishing a clear definition of waste heat in Article 2.” For example, there is a risk that fossil fuel power plants may satisfy the requirements if they use heat recovery.
More renewables in buildings and district heating?
Although a minimum renewable energy share in newbuilds and renovated houses had already been part of the directive, not all member states have implemented satisfactory regulations at national level.
The draft of the directive from November 2016 is intended to close the loophole in Article 15 (see page 79). “In the past, member states were required to set minimum levels ‘where appropriate’ – meaning more or less if they wanted to. This has now been removed, so they need to do it,” explained Lambertucci. Here, the risk of too broad a definition of waste heat as a possible energy source is also one of the key points under discussion.
Article 24 of the amendment listing focuses on district heating and introduces two main provisions (see pp. 18/19, amendment 23). First, it gives customers the option to disconnect from the network if they can prove that they are using more efficient and cleaner solutions. Second, it imposes an obligation on grid operators to allow for third-party access to renewable heat. The rationale behind these provisions is that they are likely to push district heating companies towards more efficient and eco-friendly networks, so that customers don’t need to disconnect or produce their own renewable heat.
The article was written by Riccardo Battisti, a solar thermal consultant and market researcher working at Ambiente Italia (Rome, Italy).
Websites of organisations mentioned in this article:
ITRE Committee – European Parliament: www.europarl.europa.eu/committees/en/itre/home.html
EGEC: www.egec.org
Solar Heat Europe: http://solarheateurope.eu