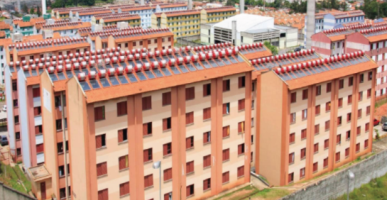 The Company of Housing and Urban Development of the State of São Paulo (CDHU-SP) and the electricity utility AES Eletropaulo joined efforts to both reduce energy consumption and benefit low-income families. AES Eletropaulo announced in a press release at the end of May that it will donate and install 5,000 solar water heaters for more than 20,000 residents of buildings located in Tiradentes, east of Sao Paulo. The estimated investment by the company amounts to around USD 25 million. The programme fulfills the requirement of the national Electricity Regulatory Agency (ANEEL), which obliges all energy utilities in Brazil to spend at least 0.5 % of their net operation income on activities aimed at reducing electricity consumption.
Photo: AES Eletropaulo

AES Eletropaulo is the largest electricity distributor in Latin America. The company supplies electricity to 24 municipalities in the metropolitan region of Sao Paulo (including the capital), which has a total population of more than 20 million. The concession area served by the company covers an area of 4,526 km², and makes up the most important socioeconomic region of the country, with 6 million consumer units.

In addition to the solar water heaters, the agreement between AES Eletropaulo and CDHU includes the replacement of conventional electric showers by a solar water heater with an electric shower that includes an intelligent electronic control that only heats the water when necessary. This hybrid system is said to reduce energy consumption by 70%. Eletropaulo thinks to have completed the installation of the solar heaters by the end of 2012.

The cooperation offers several benefits: First, it helps people to reduce their energy bills. Second, the programme will also reduce the peak electricity demand throughout the region. In addition, the partnership involves social work among the beneficiary population to educate them about rational electricity use.

The terms of the agreement are in accordance with the regulations of ANEEL. AES Eletropaulo will buy and install the solar water heaters without charging the residents for them.

CDHU-SP has installed solar heating systems in newly built homes in the state of Sao Paulo since 2007. In cooperation with electricity utilities, the company has already provided 10,500 families with solar water heaters. A tender is published to which all solar thermal manufacturers can send a commercial proposal in accordance with the technical criteria established by ASE Eletropaulo and CDHU.