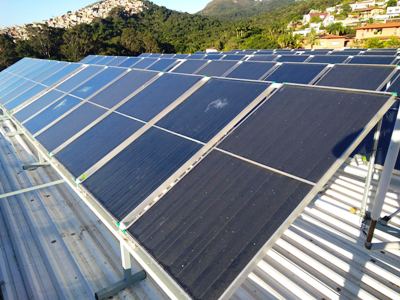 A 3,300 m² solar field is currently being built at one of Minas Tênis Clube’s four locations in Brazil. The system at the sports club in Belo Horizonte, in the province of Minas Gerais, is planned to meet 70 % of the water heating demand for five pools, including an Olympic one, and three large changing rooms. Commissioning is scheduled for the end of August. Minas Tênis Clube is private non-profit organisations and one of the biggest sports clubs in the country. At its facilities, open seven days a week, it provides services to around 73,000 members with 1,000 employees.
Photo: EhSol
The project originates from a partnership of three Brazilian companies. Enalter, a collector and tank manufacturer headquartered near Bela Horizonte, was tasked with planning and delivering the solar system. EhSol, a local solar thermal project developer, was put in charge of design and installation. Efficientia, a subsidiary of CEMIG, Minas Gerais’ largest utility, will record and verify the energy saved.
The total investment amounts to Brazilian Real (BRL) 1.4 million, or about USD 360,600. The system is owned by Minas Tênis Clube and will be operated by its technical staff. This sort of installation is in line with the club’s long-time commitment to sustainability and energy efficiency.
Money saved pays for system in five years
“Enalter developed and presented the project to the club, which welcomed the idea and, in partnership with CEMIG and Efficientia, turned it into a viable project,” said Carlos Alencar, CEO of Enalter. The endeavour is being funded by ANEEL, the Brazilian Electricity Regulatory Agency, via the PEE, also known as the Energy Efficiency Programme. Its rules stipulate that electricity suppliers must invest 0.5 % of their net turnover in energy efficiency measures. Their money is put into a fund managed by CEMIG on behalf of ANEEL. Solar water heaters which replace electric shower heads are eligible for the programme. The investment will pay off thanks to what the club saves on its energy bill each month. It will then transfer part of that money to CEMIG, i.e., ANEEL, based on a five-year energy performance contract.
Planning took one-and-a-half years, since the process involved both technical and financial matters. Roof area was not a limiting factor, as the club has plenty of it, so the focus was on efficiency and the cost-benefit ratio of the project. Fabiano Lara, CEO of EhSol, said that the conventional heating equipment, a combination of electric and gas units, had additionally been adapted to function as an effective backup system.
More than one type of collector for closed-loop systems
The installation has been designed to provide thermal energy for a range of club activities. Uncovered collectors consisting of extruded polypropylene sections will heat the swimming pools. Glazed versions, which include clamped aluminium absorbers and copper pipes, will supply the changing rooms, in addition to several closed-loop tanks able to hold 26,000 litres in total.
Closed-loop solutions have been adopted throughout. The collectors heating the swimming pools had to be insulated from the water treatment system, since their polymer base would not withstand the operating pressure of the water pumps, Alencar explained. That had been the case with a solar thermal system installed at the club in 2000: It had become inoperable soon after coming online. Another benefit of a closed-loop system is an increase in collector lifetime, as the chlorine in the water would make the polymer corrode faster.
As for the copper pipes in the closed-loop system that heats the changing rooms, the closed solution creates additional corrosion protection. “Though it would be risky, over the long term, to rely on this aspect when guaranteeing a payback period, since it is outside of the project team’s control,” Lara said. The water that the club uses comes from a well and it has been treated. But since its pH value is not constant, it can still damage the solar equipment.
Annual energy generation is estimated at 1.39 GWhth, which results in a payback period of about 5 years and an IRR, or internal rate of return, of 16.5 %. The club can expect a yearly saving of nearly BRL 500,000 (USD 129,000), which includes improvements that have made the existing backup heating system more efficient.
This article was written by Leticia Sother, a Belo Horizonte-based freelance journalist who holds a bachelor’s degree in architecture.
Organisations mentioned in this article:
Enalter: http://www.enalter.com.br
EhSol: https://de-de.facebook.com/ehsolenergia/