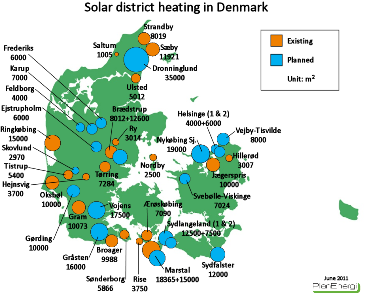 Solar heat is penetrating Denmark’s district heating networks at an unprecedented rate: Around 90,000m2 of collector area (63 MWth) are going to be connected to the country’s networks in 2011. The map shows the existing and planned solar district heating systems in Denmark, including the installed or planned collector area. The Danish consulting and engineering company PlanEnergi was responsible of drafting the map in the framework of Task 45 “Large Solar Heating/Cooling Systems, Seasonal Storage, Heat Pumps”. The task was started in January 2011 by the International Energy Agency’s Solar Heating and Cooling Programme (IEA SHC), which will run until December 2013.
Source: PlanEnergi

“Compared to last year, the capacity of the new solar district heating will be twice as much,” Task 45 Operating Agent, Jan Erik Nielsen from PlanEnergi, said in a IEA SHC press release from the end of September. ”And, the main reason for this dramatic development is simple: it’s good business. Decreasing costs and increasing efficiency makes solar district heating competitive even in the absence of any subsidies.” In addition, it makes Denmark the most dynamic solar thermal market in Europe in 2011. According to PlanEnergi estimations, 2011 market volume would reach 110,000 m2 (77 MWth) – 90,000 m2 in district heating and 20,000 m2 in the residential sector. This corresponds to an increase of 89 % compared to the 58,100 m2 (41 MWth) of newly installed collector area in 2010.

Since 1988, Denmark has been one of the countries which have made extensive use of solar energy for district heating. Over the last five years, however, the market has virtually exploded: Between 2006 and 2010, installed capacity has increased 5-fold, from 30 to 150 MWth. Solar district heating plays a crucial role in meeting the national solar targets. “In 2007, we published our Solar Thermal Strategy,” Jens Windeleff of the Danish Energy Authority is quoted in the above mentioned press release. “We believe that by 2050, solar could provide 40% of the energy needed to heat Denmark’s buildings. Which is why we have redoubled our efforts to further improve solar district heating in cooperation with the IEA SHC.” Task 45 is supported by researchers from 7 countries and is going to hold his second task meeting in Calgary – Calgary & Banff, Alberta (Canada), from 23 to 27 October 2011.