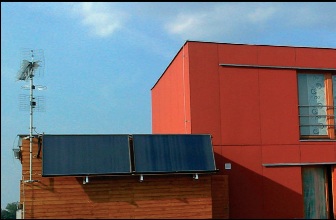 The subsidy scheme in the Czech Republic supports the installation of residential solar hot water systems and combi systems for hot water and space heating up to the year 2012. Photo: Propuls

The Czech solar thermal market is a small, but dynamic one. According to the Ministry of Industry and Trade, the newly installed collector area increased by 40 % to 35,000 m2 last year (2007: 25,000 m2). The popularity of solar thermal energy grew mostly among private households and families – solar thermal installations on family housing are now making up around 75% of all installations in the Czech Republic.

The key factors driving market development since 2008 have been the governmental subsidy schemes. The first push came from a general government grant, which ended in March 2009. This scheme only allowed to apply for a subsidy if the system's installation was no more than 18 months old. The government granted 50 % of the system costs, up to a maximum of Czech Korun (CZK) 55,000 ( approx. EUR 2,100) for simple domestic hot water systems and 65,000 (approx. EUR 2,500) for systems supplying energy for hot water generation, as well as space heating.

It was a successful programme. The Ministry of the Environment granted subsidies to a total of 2,920 installations, hence approving 65% of the sent-in request and spending CZK 156,041,148 (approx. EUR 6.1 million).

This national grant programme ended in March 2009 and was replaced by a new grant scheme under the name of “Zelena Usporam“, which translates as ”Green Savings” and focuses on grants for owners of residential buildings.

In contrast to the previous programme, this one is not financed by national resources, but instead by sales of emission credits under the Kyoto protocol. The overall budget Zelena Usporam can expect lies around CZK 25 billion (approx. EUR 1 billion) until 2012.

Furthermore, there are two significant differences between Zelena Usporam and its predecessor. First: since March 2009, it has no longer been possible to apply for a grant for an already installed solar system. Secondly, the grant for a solar system used for heating both water and the household itself went up to a maximum of CZK 80,000.

Regarding administrative aspects of the scheme, the government is also expected to integrate financial institutions into it (banks, building societies), in order to enable the grant process to function more smoothly. This will allow individuals to apply for these grants in many more locations, making them more accessible to the masses. This, together with the entirety of the new grant scheme, will hopefully result in an equally progressive development in the Czech solar market as the one we have seen in recent years.