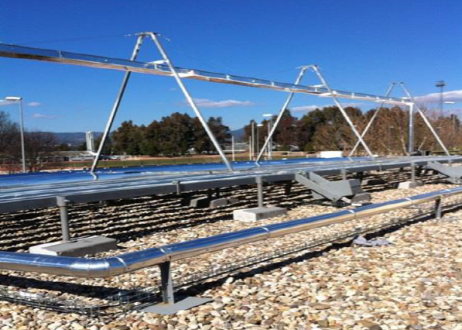 Last December, the Spanish Advanced Technology Center for Renewable Energies, CTAER, and the Solar Concentra forum in Spain released a study which evaluated the potential of medium- and low-temperature solar thermal concentration technologies across Spain (between 100 and 400 °C). The study, entitled Applications and market potential of medium-temperature concentrating solar power technologies in Spain, concludes that these technologies have already been cost-competitive with some alternatives, such as oil and gas, in the industrial and residential segments, and it provides some recommendations to promote this promising market. The photo shows one of the very few solar process heat installations in Spain with concentrating technology. It is a pilot plant with a Fresnel collector which has been supplying the animal feed production unit of Spanish company Grasas del Guadalquivir in Cordoba since in March 2015.
Photo: INERSUR from CTAER study
To date, installations of solar concentration technologies in Spain have mostly been limited to Concentrating Solar Power (CSP) plants in utility sizes for electricity generation. This market experienced notable growth in Spain over the last five years when some 2,300 MW of capacity were installed, making Spain the world’s largest market by far. But the utility-scale market came to an abrupt halt two years ago. Since then, most local companies have been working at projects abroad, and there is no longer a domestic market for new large developments. Hence, some sector organisations – such as CTAER based in Andalusia and the Solar Concentra organisation (dependent of CTAER) – have decided to intensify their efforts of promoting medium-temperature technologies for heat generation in industrial and commercial sizes.
Last December, CTAER and Solar Concentra jointly released the study Applications and market potential of medium-temperature concentrating solar power technologies in Spain. On 176 pages, the study assesses the costs associated with generating thermal energy by means of medium-temperature solar concentrating technologies. The three technologies primarily in the focus of the study were: vacuum tube collectors with compound parabolic concentrators (CPC), linear Fresnel concentrators and parabolic trough collectors.
Andalusia’s large-scale solar systems more cost-effective than gas, electricity or diesel
The study calculates the heat prices for the above-mentioned three collector technologies based on various geographical locations, supply temperature levels between 100 and 350 °C, different system sizes between 50 and 20,000 m² and three system cost levels without subsidies. The study and the annex include more than 30 tables of heat prices from 12 Spanish cities, either calculated based on a financing period of 10 or 20 years.

Heat price ranges of different sites and technologies as per table 6.38, 6.40, 6.42 and 6.43. The heat price is calculated for an operation rate of 75%.
Source: CTAER
The study is intended as a useful tool for companies, institutions and SMEs to evaluate the best cost-competitive technology in every region of Spain. According to Valeriano Ruiz, Director General of CTAER, “the current process heat consumption in Spain which could be supplied by medium-temperature solar technologies is estimated at 30 Mtoe.” This is equivalent to around EUR 30 billion or around 3 % of the entire Spanish GDP based on the alternative use of diesel for heating. “Current technologies not only have huge market potential, but they also provide considerable cost efficiencies regarding current components, installation and maintenance,” Ruiz told solarthermalworld.org. The director of CTAER believes that “solar concentrating systems for medium-temperature applications do not involve a high degree of specialisation because, except for the collectors, the components are used in conventional thermal systems as well. It is the reason for their high cost competitiveness when retrofitting to solar concentrating systems.”
CTAER also has some prototype systems available which offer useful information to researchers and companies. There are two systems already in operation (tower and parabolic canal) and two currently under construction (linear Fresnel collector and parabolic trough). Ruiz emphasised that more R&D funding would be necessary to promote awareness and make procedures more standardised for end users.
Websites of institutions and companies mentioned in the article:
https://ctaer.com
http://www.solarconcentra.org
http://www.grasasdelguadalquivir.com/
https://solarthermalworld.org/wp-content/uploads/2016/01/spain_2015_solar_concentra_market_potential.pdf