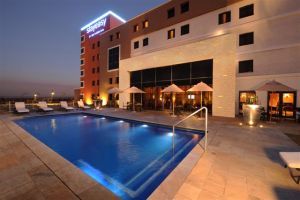 Another hotel is going green. The owners of the Southern Sun Stay Easy Emalahleni Hotel in Witbank, South Africa, follow the trend of using solar water heating applications and have had a solar thermal system installed recently on roof tops. “The company will always try to incorporate green features into its hotels going forward,” Mark Boyd, the Development Director of Southern Sun, says. The company that delivered and installed the systems was Solar Heat Exchangers, a distributor based in Gauteng, South Africa.

“The solar components have reduced the peak electricity load needed for supplying hot water to the building by 70 kW,” Dylan Tudor-Jones, Managing Member of Solar Heat Exchangers, stated in a company´s press release. The capacity of the solar system amounts to only 6,000 litres, due to limited space on the roof. A heat pump system functions as a backup. “When there is not enough solar radiation, the heat pump is a good option of additional support for the 60° hot water system,” says Tudor-Jones. Roughly 40 % of the total energy consumption in the South African hotel industry is used to heat up water. Solar water heating systems can therefore save up to 40 % of the costs and reap noticeable environmental benefits.

Collector field: The solar panels shown in the figure above are going to supply hot water to the shower houses of Anglo Platinum miners in Brakfontein, north-east of Pretoria.


But this is not the only commercial sector in South Africa, in which Solar Heat is present. The distributor also installed 270 flat plate collectors at the top of three shower houses of Anglo Platinum miners in Brakfontein, north-east of Pretoria. It is one of the largest centralised solar water heating installations in South Africa to date. “The solar system pre-feeds a 28,000 litre conventional system with electrical backup. Overall, the solar system is sized to meet hot water needs for a full day, with the backup system being designed to heat the required amount of water in case of bad weather,” Tudor-Jones explained. The mine employs over 1,500 miners and officials, who have to change and shower after every shift.

A comprehensive energy efficiency programme helps Anglo Platinum in assessing ways to reduce electricity consumption. “We have publicly committed to reduce our energy consumption until 2014 per unit of production by 15 % off the 2004 baseline,” Stephen Bullock, the Sustainable Development Manager of Anglo Platinum, says. “The solar thermal installation is one of the measures that will help us to achieve these targets. If this type of renewable energy is successful, we will most certainly implement solar water heating in other facilities and operations within the Group,” adds Bullock.

Solar Heat Exchanger was founded in Gauteng in 1987. Its product range covers all solar thermal application needs – from domestic to commercial. The company offers internationally manufactured collectors and geysers and obtained also international certifications, such as the Solar Keymark, CSTBat, cener and SABS Mark. The company is furthermore part of the Eskom Rebate Programme.