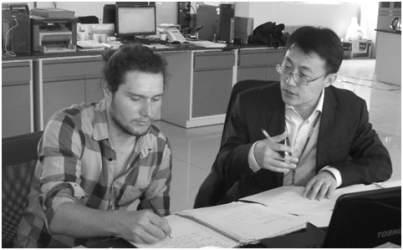 Shandong is among the Chinese provinces with the most advanced solar thermal industry in China. Simon Goess (left), a researcher from the Netherlands, has recently carried out a number of interviews with stakeholders to understand how the province fosters innovation. The photo shows the interview with Dr Yuwu Li, Head of the Solar Application Product Inspection Laboratory in Shandong's capital city Jinan. Li is also Vice Secretary of the Shandong Solar Energy Industry Association.
Photo: Liying Cui
“The most advanced solar thermal industry in China is located in Shandong and accounts for roughly 30 % of the total solar thermal industrial output in China,” Li explains. However, because the industry consists of more than 500 system suppliers, including the very small ones, the market is rather fragmented. There are about 200 companies of greater importance in Shandong and 20 of them are really big ones, which supply more than 80 % of the province’s market.

Photo: Linuo Paradigma
Kun Qi, General Manager of the engineering department at solar thermal system manufacturer and supplier Linuo Paradigma (see the photo on the left), summarises the different support policies for solar thermal technology in Shandong as follows: “Since 2008, solar water heating has been mandatory for new buildings with less than 13 floors. Since 2014, the city council of Jinan promulgated another mandatory installation policy targeting new buildings with less than 33 storeys. These high-rise buildings need the integration of new technologies, such as split solar water heaters.”
Quick development of building-integrated solar water heating
Another current support measure of the Shandong provincial government is the promotion of the national green building standard which requires energy efficiency of public buildings to 65 % during the 13th Five-Year Plan. “Shandong province requires the installation of solar water heaters in buildings that want to reach the one-star class, which is actually the lowest of the three green building standards,” Qi explains. According to a news article on china.org.cn from 14 May 2013, Shandong “announced instructions for the creation of new green buildings with a total area of more than 50 million m² by the end of 2015.” More than 50 % of the new buildings must use renewable energies by then.
Standards still voluntary, but recommended
Consequently, Li expects a quick development of building-integrated solar water heating systems and is cooperating with the Shandong Solar Energy Industry Association and the Shandong Construction Development Research Institute to establish new standards. “Our laboratory creates new standards and monitoring schemes for solar thermal products. In that respect, we act as the bridge between the government and the industry,” Li explains. This is especially important in Shandong, because in the province, standards have been tighter than at national level. All standards in China are still voluntarily, but recommended.
“There are still many small companies which do not comply with standards and, thus, produce low-quality products,” Qi explains. Li, too, emphasises the importance of standards and certifications for the Chinese solar thermal industry. “Unfair competition from companies that do not adhere to the standards can bring discredit upon the whole solar industry, due to low quality and unsafe products.”
The Solar Application Product Inspection Laboratory based in Jinan is a subdivision of the National Supervision and Inspection Center and employs a staff of 12. The laboratory tests solar thermal systems from various Chinese companies for compliance with national and provincial standards. Li’s team is also responsible for supervising the quality of solar products and for devising standards related to solar applications.
Shandong Linuo Paradigma is a Sino-German joint venture established by the Chinese Linuo Group and German Paradigma in April 2001. The company has been active in manufacturing, research and the international trade of solar thermal technology and produced around 1 million m2 of solar water heaters in 2012. Linuo was one of the early adopters of split solar water heaters which are now deployed in high-rise buildings as balcony-integrated solar water heaters.
The interviews were carried out by Simon Goess and translated by Chi Zhang / Liying Cui.
More information:
Linuo Paradigma: http://www.linuo-paradigma.com/
Shandong Solar Energy Industry Association: http://www.sd-solar.com.cn/
Shanghai Jiao Tong University: http://en.sjtu.edu.cn/
National Supervision and Inspection Center for Energy-Saving Product Quality: http://www.gjjn.net
Energy Conservation Office of Shandong Province: http://www.sdetn.gov.cn/jnb/&nbsp;