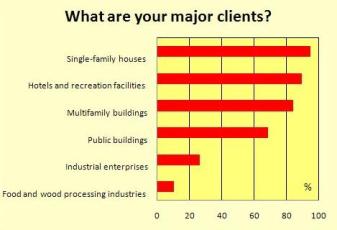 Solar systems in Bulgaria are mainly used for generating hot water for domestic uses. The second biggest score in a survey among solar thermal system suppliers gained the sector of hotels and recreation facilities, particularly at the Black Sea coast and in mountain resorts.
Source: Sofia Energy Centre

In the summer of 2008, the Bulgarian Sofia Energy Centre carried out a market survey among 75 companies, out of which 19 enterprises sent back the questionnaire and also answered the question “What are your major clients?” The answers to that question are shown in the above chart. Besides residential home owners and hotels, the third important category of clients for the solar thermal industry is the multifamily housing sector. The survey was carried out in the framework of the EU-Project Tran-Solar (EIE/07/117/SI2.466838), which is coordinated by the European Solar Thermal Industry Federation (ESTIF). It aims at transferring know-how in the manufacturing and marketing of solar thermal products from the old EU member states to the countries of Central and Eastern Europe. Bulgaria was one of seven countries selected for that goal.

The Bulgarian market is still a small one, with a newly installed collector area of estimated 8,000 m2 in 2009 and a cumulated collector area of 80,000 m² in operation. Its history goes back to the late 1970s when the launch of a large-scale national programme resulted in the installation of 50,000 m2 of collector area mainly at the Black Sea coast. After the change in 1989, those systems have been poorly maintained and practically abandoned. During 1990 and 2002, various funding sources enabled the implementation of a number of demonstration projects throughout the country. They proved the commercial viability of solar technology, so that the solar thermal market in Bulgaria has been growing at a steady rate since 2002.

Common component shares in overall system costs: The figures shown above base on the following question from the summer 2008 survey by the Sofia Energy Centre: “Please assess the share in costs of each component in relation to overall costs.”
Source: Sofia Energy Centre

Until now, costumers mainly requested flat plate collectors with selective coated absorbers, in combination with closed loop systems including pumps, heat exchanger and antifreeze system. There has recently been an increased interest in vacuum-tube collectors in spite of their higher costs.
The summer 2008 survey clearly shows the collector as having by far the highest share in overall system costs (see figure above), followed by the tank with a share of 13%. Installation costs amount to only 10% of the total.