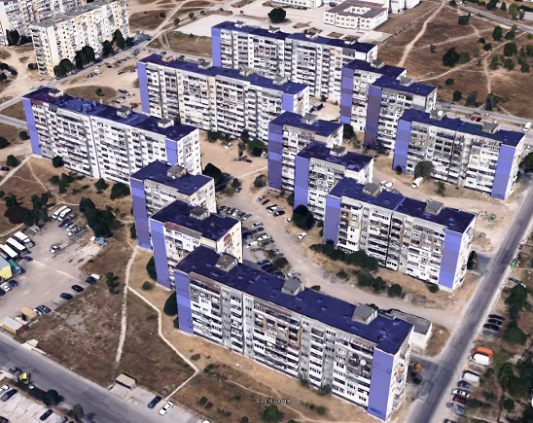 Throughout the past decades, Bulgaria’s governments have focused almost exclusively on large conventional energy projects, such as nuclear plants or gas and oil pipelines, whereas small and decentralised renewable energy systems haven’t received much attention from politicians. But the large-scale projects are complex and expensive, so none of them have come to fruition. This is where the most current study by the Bulgarian Institute for Zero Energy Buildings (IZEB) comes in: It sends an important message to all stakeholders by describing a way to keep the entire Bulgarian capital of Sofia and its 1.2 million inhabitants warm without the use of any combustion fuel.
Figure taken from https://greentech.bg/archives/69489
IZEB represents Bulgaria in the Horizon 2020 project Solar District Heating and actions from Policy to Market (SDHp2m), which aims to popularise the use of solar district heating across Europe. After the 2015 release of a study on the solar thermal potential of the entire country (see the attached document), the institute published another one in mid-December 2016 about Bulgaria’s capital, Sofia. The results from this latest study have been summarised in an article published on web portal greentech.bg. The conclusion: If energy efficiency measures were used to turn the around 10,000 blocks of flats in Sofia into zero- or nearly zero-energy buildings, roof-installed solar thermal systems could provide all the heat required. “With irradiation at 1,200 to 1,600 kWh/m2, Sofia’s potential makes solar energy not a distant alternative, but the most logical option to use for achieving a high-efficiency zero-carbon energy system,” the authors from IZEB conclude. They estimate that solar installations could generate 7,000 GWh of heat energy and 2,000 GWh of electricity per year – more than the yearly output of district heating company Toplofikatsia Sofia.
After energy-efficient renovation, prefabricated buildings will not need water at between 80 and 95 °C but only at 60 °C, the experts from IZEB say. To ensure that the lower temperature level is sufficient, they recommend the use of ground- and wall-mounted, serpentine-shaped pipes instead of radiators, in addition to photovoltaic systems and PVT solar collectors on roofs and facades. In the study, they point to the example of Block 35 in Studentski Grad, the student quarter of the Bulgarian capital. The building requires 1.3 GWh of heat energy and 0.5 GWh of electricity each year. With energy-efficient renovation, consumption could be cut by 60 %, and roof- and facade-mounted PVT solar panels could provide 0.5 GWh of thermal energy and 0.2 GWh of electricity.
There is still the problem of an energy production peak in August, when most students are not in university. The authors offer two solutions: The remaining thermal energy could be converted into electricity and fed into the national power grid. Since this conversion inevitably leads to energy losses, the preferable solution would be to save redundant heat energy in a thermal storage system set up in the backyard of a block of flats.
Bulgaria’s capital and the country as a whole are still far away from having an environmentally friendly energy grid in place, and it will take a long time to turn the IZEB findings into real-life solutions. But as the Chinese say, every long journey begins with a single step. “At present, we have SDH projects in the city of Varna on the Black Sea coast and the village of Gorna Malina some 30 kilometres away from Sofia,” said SDHp2m Project Coordinator Marta Stoilova (see attached presentation). “Work in Varna – a part of the city which has had no district heating connection so far – is just beginning, but our SDH project for three public buildings in Gorna Malina can be implemented as soon as funding is secured.”
Websites of institutions and projects mentioned in this article:
Institute for Zero Energy Buildings (IZEB): http://www.izeb.eu
Solar District Heating and actions from Policy to Market (SDHp2m): http://www.solar-district-heating.eu/SDHrelatedprojects/AboutSDHp2m.aspx
https://solarthermalworld.org/wp-content/uploads/2017/01/bulgaria_sdh-analysis_2015.pdf
https://solarthermalworld.org/wp-content/uploads/2017/01/presentation_pilot_project_gorna_malina.pdf