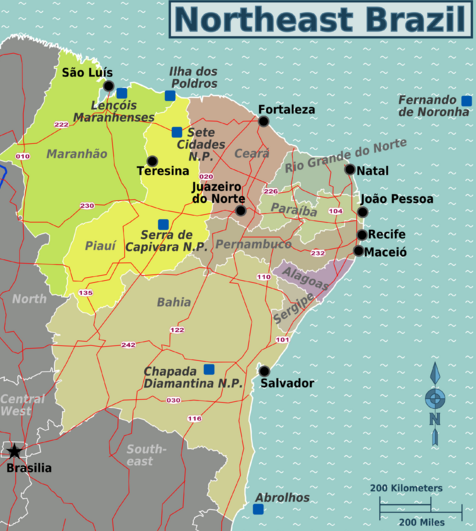 Solar Heat for Industrial Processes (SHIP) is taking its first steps on the Brazilian market. Considering the mere handful of SHIP plants in operation in a country as huge as this one, the German Agency for International Cooperation (GIZ) is contemplating SHIP support measures as part of its long-term project Concentrating Solar Power in Brazil (2013 – 2017). There have been feasibility studies on SHIP plants in the north-eastern states of Pernambuco and Ceara and the first online training course on solar process heat in March 2017 attracted 80 participants from across the country.
Map: wikitravel.org
One of the principal milestones of the GIZ project has been the inclusion of concentrating solar power (CSP) in Brazil’s national energy strategy (Plano Nacional de Energia – PNE). “The energy ministry has set a target of 1 % CSP electricity by 2025 and 2 % by 2030, which means roughly 1,000 MW and 2,500 MW of CSP capacity, respectively,” explained Florian Remann, Member of the GIZ’s Concentrating Solar Power project. Targets for solar process heat, however, have yet to be set.
The current endeavour has resulted in German engineering business IA Tech carrying out five feasibility studies on SHIP plants in industries in Brazil. Particular challnges such as the absence of a gas network and where the industry mostly uses wood residue or biomass waste such as bagasse for heating are opportunities for SHIP projects. One promising case study has been Agropaulo in the state of Ceara, which produces ethanol from sugar cane and uses bagasse to cover heat demand.
“Brazil has a law in place to restrict the use of uncertified biomass, and wood in particular, for industrial heat production, but it is not applied consistently,” said Christoph Rau, Engineer at IA Tech, who drafted the feasibility studies. This means that a certain part of the industry in Pernambuco basically uses illegal wood resources, which makes it difficult to find a base case for the profitability analysis.
Professor Elizabeth Duarte Pereira from the UNA University Centre in Belo Horizonte sees great potential for SHIP technologies in Pernambuco’s fruit processing industry. “Eighty-five per cent of the mangoes exported by Brazil are cultivated along the São Francisco river in the south of the state,” she explained. “Post-harvest, the produce is immersed in 55 °C water for 5 minutes, with 0.055 % fungicide and 0.1 % fruit cleaner added.” The hydrothermal treatment of all fruit also includes a bath of up to 90 minutes in 46.1 °C water, an easy-to-achieve low-temperature application for solar. Duarte Pereira presented during the stakeholder meeting of the international SHIP project Solar Payback in February.
New online training course
A second GIZ milestone regarding SHIP was the first online training course on solar process heat carried out in March 2017. The training material created by IA Tech includes an introduction to collector types, shows hydraulic integration diagrams, describes potential applications and displays their key figures. After subscribing to the course, participants can download the training materials within 20 days and a certificate at the end of the course will attest that they have completed the 10-hour training programme. Each chapter is followed by a multiple-choice questionnaire to test participants’ knowledge. A second course on solar process heat is in planning.
More information on the Concentrating Solar Power project in Brazil:
http://energiaheliotermica.gov.br/en/csp-in-brazil