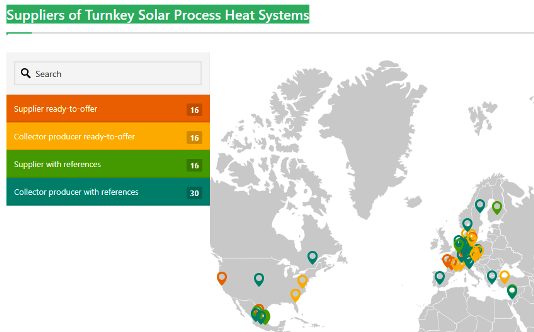 2017 was a record year for systems providing solar heat for industrial processes, since at least 110 large ones adding up to 192,580 m² were put into operation. This has been the result of a survey among around 80 turnkey suppliers currently listed on the SHIP Supplier World Map, created by the international Solar Payback project. The total at the end of 2017 stood at approximately 635 SHIP systems, a 21 % increase over the 525 installations which a similar survey showed in early 2017.
Image: solar-payback.com/suppliers
The statistic include the 100 MW steam plant for enhanced oil recovery in Oman. The system was commissioned by US-based Glasspoint in late 2017, although the turnkey supplier has yet to show up on the world map. The plant’s current capacity was derived from four steam-producing blocks – one-tenth of the final system size requested by state-owned Petroleum Development Oman. The construction of eight additional blocks amounting to 200 MWth has been announced for this year.
What the figures did not include were 378 small preheaters, totalling 2,234 m², which had been installed in 2017 in India’s centre of silk production, Sidlaghatta, situated in the south of the country. On average, one of these 5.9 m² collector fields allows a silk producer to do away with wood or briquettes by solar preheating the region’s traditional stoves.
Around the globe, a growing number of strongly committed turnkey SHIP suppliers drove market growth last year. However, the majority – 86 % of them – were not satisfied with business development, according to the above-mentioned survey. The reasons for the small success rate were low fossil fuel prices, limited awareness and a customer preference for short payback periods.
Altogether, 34 companies, which means not even half of the companies shown on the world map, were able to commission one or more SHIP installations in 2017. Eight companies reported more than 5 installations.
Among the 34 successful SHIP suppliers ten have their headquarters in India, six in Mexico, five in China, four in Germany, three in Austria and one each in Belgium, Canada, France, Israel, the Netherlands and the USA. In the next weeks, the reference systems will be added to the text boxes for each company shown on the world map.
Largest SHIP installations in China and Afghanistan
Chinese-based Linuo Paradigma announced the largest SHIP installation completed in 2017. It is a 3,300 m² vacuum tube collector field to supply heat to Heli Lithium Industry in Tibet. Soliterm, a German parabolic trough collector manufacturer, delivered and installed a 3,260 m² collector field, the second-biggest last year, at a meat plant in Afghanistan. The third-largest was, again, set up in China. Solar thermal manufacturer Himin Solar erected a 2,200 m² vacuum tube collector field at Polyocean Algae Industry Group, a company that processes sea vegetables in the city of Qingdao, in the province of Shandong.
Key SHIP markets in 2017: India, Mexico and China
Mexico and India rank first regarding SHIP system additions in 2017, but the average system size in India was much higher, which means it contributed more SHIP collector area altogether (see the table below). China also saw the installation of a relevant number of new SHIP plants – 19, to be exact, totalling 11,534 m² of collector area. Overall, the SHIP market has become an increasingly global business. SHIP systems have been installed not only in the countries listed in the table below, but also in 12 others: Cyprus, Germany, Israel, Jordan, Malaysia, Myanmar, the Netherlands, Senegal, South Korea, Turkey, Ukraine and the USA.
Number and collector field size of SHIP plants added on key markets. These figures do not include the 378 preheaters installed in India for silk production and the enhanced oil recovery plant in Oman. The location of 10 SHIP reference systems set up in 2017 has not been made available.
Source: Solar Payback SHIP Supplier Survey 2017
Vacuum tubes were the main collector technology for SHIP plants installed in 2017. Even in India, SHIP suppliers were increasingly making use of vacuum tube collectors combined with CPCs. Regarding concentrating technologies, the dominant collector type was parabolic trough. Only one Indian manufacturer used dishes and three systems had reportedly been equipped with linear Fresnel collectors.
New SHIP installations in 2017 and the related collector type. These figures do not include the 378 preheaters installed in India for silk production and the enhanced oil recovery plant in Oman.
Source: Solar Payback SHIP Supplier Survey 2017
The survey among turnkey SHIP suppliers was supported by Solar Payback, a three-year project which is to run from October 2016 to September 2019 and aims to promote SHIP use across four partner countries – Brazil, India, Mexico and South Africa. To raise awareness of the technical and economic potential of SHIP technologies, it offers clear and verifiable information on the costs and benefits of SHIP applications and supports the construction of selected reference systems as part of the German International Climate Initiative, or IKI. It also provides SHIP training for bankers and engineers in the four countries.
The execution of the survey was supported by Eva Augsten from Germany on the global level and Jaideep Malaviya in India – both members of the solrico network.
Organisations mentioned in this article:
https://www.solar-payback.com
http://www.solrico.com
https://www.glasspoint.com/
http://www.linuo-paradigma.com/
http://www.solitem.de/
http://www.himinsun.com/