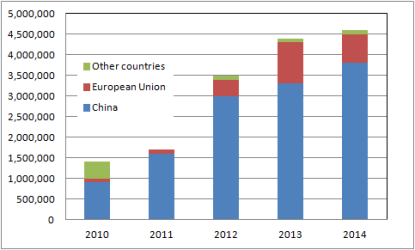 Brazil´s solar thermal market grew by 20 % in 2012 and 2013, and therefore has been attracting an increasing number of international suppliers. Imports, mainly from China, have tripled since 2009. According to online portal AliceWeb, which includes the official foreign trade statistics for 2014, Brazil imported solar water heater equipment registered under code NCM 84191910 at a value of USD 4.6 million. The chart shows from where the equipment was imported.
Source: http://aliceweb.mdic.gov.br/
According to estimates by DASOL, the Solar Heating Department of the Brazilian Association of Refrigeration, Air Conditioning, Ventilation and Heating, ABRAVA, the annual turnover of the solar thermal sector adds up to around USD 630 million, including production, sales and installation. The import value cannot be compared directly with the turnover of the sector, because the USD 4.6 million only refers to the net wholesale prices. According to the association’s estimates, importer turnover based on gross end consumer prices, including taxes and transport, would be 3.6 more than in the Alice web statistics, totaling US 16.5 million. This means that a still rather small share of 2.6 % of solar thermal market volume consists of imports.

The Chinese share in imports rose compared to 2013, but is still below the record level of 2011, when it reached approximately 90 % of the total imports. Meanwhile, the European Union (Italy being the most important country of origin here) gained some ground: Whereas it made up less than 10 % of the total import value until 2012, it had a share of 22 % in 2013 and 16 % in 2014.

Unfortunately, the statistics do not deliver information on the number of imported square meters or tanks. Industry stakeholders believe that NCM 84191910 includes most of the imported solar thermal equipment, which could be tubes, as well as collectors or tanks, because the country’s VAT exemption only applies to this one code – there are no separate HS codes for solar collectors or tanks. China accounted for 82 % of the total import value of USD 4.6 million, followed by the European Union with about 16 % of all imports (see the following table).

Source: http://aliceweb.mdic.gov.br/
This news was written by Vanessa Kriele, a German freelance journalist specialised in renewable energies and world economics.