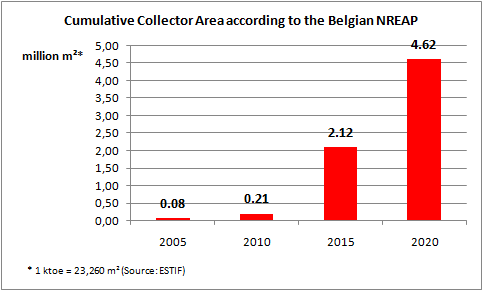 After a five-month delay, Belgium finally submitted its National Renewable Energy Action Plan (NREAP) in November 2010 – with quite ambitious targets for solar thermal: The cumulative collector area is to increase by a 22-fold, from 0.21 million m² in 2010 to 4.62 million m² in 2020. Tax credits and incentive programmes are thought to support the implementation. However, experts doubt its feasibility.
Source: NREAP/own calculations

According to Belgium’s NREAP targets, the share of renewable energies in the total national heating and cooling demand is planned to increase from today’s 2.3% to 11.9% by 2020 (see table). The 11.9% represent an amount of 2,588 ktoe and are supposed to be covered largely through biomass (78.6%). Heat pumps are thought to contribute 13.4% and solar thermal energy is going to have a share of at least 7.7%. The latter corresponds to an energy amount of 198.7 ktoe, which translates into a total collector area of 4.62 million m². Hence, the collector area in operation per capita in 2020 would amount to 0.43m² – which is well above the EU-27 average of 0.26 m² (see http://www.solarthermalworld.org/node/1503).

Two national financial instruments already in place are thought to help achieve these ambitious targets: First, the income tax reduction of 40% of the investment costs of a solar thermal system, and second, the low-interest loan with 1.5%. Furthermore, there are subsidies for solar thermal systems whose incentive level differs throughout the three Belgian regions of Flanders, Wallonia and Brussels.

Experts, however, see the announced solar target more critical: “Only if the state offers large incentives – and simultaneously implements a solar obligation – can we perhaps come close to the forecast,” states Jean-Paul Vantomme, former Chairman of the Belgian solar thermal association BELSOLAR, and Consultant and former Sales Director at Belgian collector manufacturer ESE. “In my opinion, the 4.62 million m² in 2020 are far too optimistic. The Belgian solar thermal industry can only dream of these numbers coming true. ”

Since January 2010, the Belgian solar association BELSOLAR is an independent department (Section 5) of the Belgian Association of Heating Technology (ATTB). According to Vantomme, the dual membership of many solar companies in both associations is therefore no longer necessary. In addition, the solar thermal sector is now profiting from better financial opportunities and a well-functioning administration.