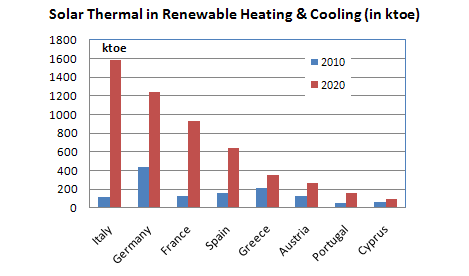 Clear-cut concepts and mandatory targets to protect the climate was what the European Commission requested from the 27 EU members as they created their National Renewable Energy Action Plans (NREAPs). On 30 June 2010, 23 states delivered their national version – with meagre success for solar thermal technology. Carried out by the European Solar Thermal Industry Federation (ESTIF), an analysis of the presently available NREAPs shows that only the 8 countries displayed in the figure above included significant collector area and growth rates in their plans lasting until 2020.
Source: ESTIF

In 8 of the 23 countries, one could make out some ambition when it comes to planning collector area installations until 2020 (see figure above). Italy assumes the leading role on this short list, followed by Germany, France, Spain and Greece. The figure above compares the mandatory energy amount stipulated in the NREAP, which solar is to contribute to heating and cooling in 2020, with the amount of this year.

However, even in some of these countries, there exists a large gap between what is politically announced and the share considered achievable by the national associations (see the following figure). With 19%, Greece stipulated the highest share of solar thermal in supplying heating and cooling systems – a contribution only slightly below the target of the national association EBHE with 21 %. In Germany, the solar thermal association BSW Solar believes the share could be twice as high (18 %) as the one stipulated in the NREAP (9 %).

Figure 2: Share of solar thermal in renewable heating and cooling 2010 and 2020. The numbers were taken from the National Renewable Energy Action Plans and compared to the growth levels targeted by the national associations for solar thermal.
Source: ESTIF

Solar heating and cooling does not play a significant role in the other of the 23 presently available NREAPs. Moreover, the renewable heating and cooling share does not do well in comparison to demand. Although heating has almost a 50% share in the final energy consumption of the 27 EU states (Figure from 2007), renewable energy supply still has its focus on electricity generation. “Although all NREAPs acknowledge that renewable heat is the biggest component of the final energy demand and will remain so until 2020, they set objectives for renewable heat that are significantly lower than those of electricity,” Xavier Noyon, ESTIF’s Secretary General, criticises (see interview here).

According to ESTIF’S analysis, the 27 EU-states want to cover a mere 1.2 % of the gross final energy consumption for heating and cooling with solar thermal until 2020. This corresponds to a share of 5.47 % in all renewable energy technologies used for heating and cooling, or a per capita collector area of just 0.257 m². The ESTIF 2020 target with its 0.8 m² per capita was about three times as high.

Generally, a direct comparison of the growth targets for solar thermal in various NREAPs proves to be a complicated task because of the different national conditions for it. For example, the final energy demand for heating and cooling is different in each country, as well as the share in heating and cooling energy which the NREAP wants to substitute with renewable energy. The latter of these two is the basis for calculating the share of solar thermal. For example, Malta has a solar thermal share in renewable heating and cooling sources of 62%. Considering the planned collector area, however, the number of square metres is negligible in comparison. The opposite is true for France. The solar thermal share of 4.7% is quite low in comparison, but France rates third on the list of planned collector area by 2020. Calculated per capita, the planned collector area is still more than double the one in Malta (0.35 m² to 0.15 m² per capita).