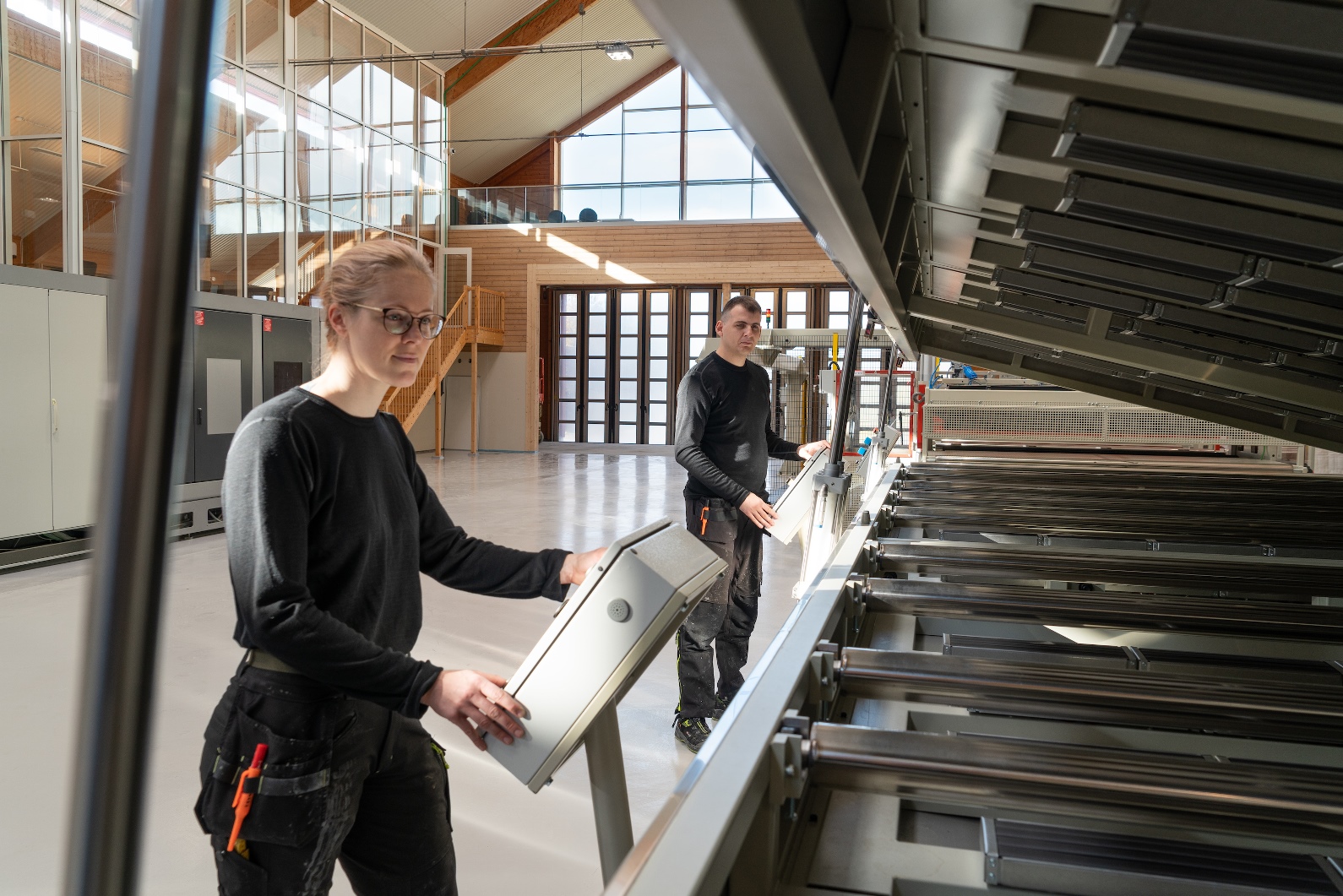 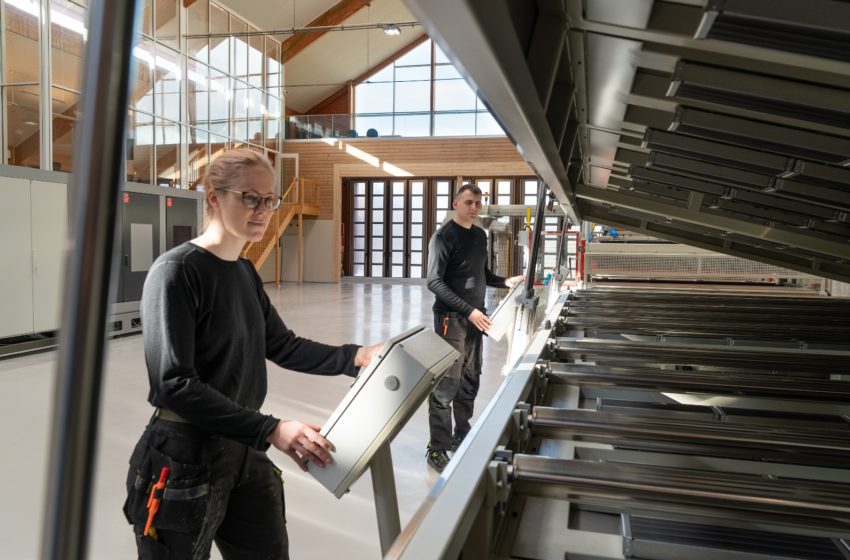 Inaventa Solar has now started operating a fully automated production line for solar collectors with polymer absorbers in Jevnaker, Norway. It took about 18 months from placing the order to commissioning the new, unique production equipment, on which the start-up spent around EUR 4 million. The money was raised by its parent company, the 3 Norske Group, a privately held business also based in Norway. In a mid-November press release, Inaventa stated that the production output of its factory is 600,000 m2 of collector area per year, which corresponds to 420 MW of solar thermal capacity. The above photo shows part of the interior of the factory, with the annealing oven and the infrared welding machine visible in the back. The annealing oven ensures a close to 100 % material crystallisation to minimize thermal deformation. The welding machine is used to join the extruded absorber sheets to the injection-moulded end caps.
Photo: Inaventa Solar AS
“Our innovative approach has been to replace metals with high performance polymers. It’s a trend we also see happening in other sectors such as automotive and aerospace,” explained Ingvild Skjelland, Communications Manager at Inaventa Solar. The distinct advantage of using polymers in absorber production is that they provide greater flexibility in collector design and allow for highly automated manufacture, which brings costs down. The company makes use of both of these benefits.
The collectors can be made to any length between 2 m and 6 m, at a set width of 60 cm, and are used in building integration projects. “The metal frame polymer absorbers delivered to a building site are modular in design. Their low weight makes transport and on-site integration much easier,” said Skjelland.

The channels of extruded polymer absorbers (see photo) are filled with water. Their walls serve as a large heat transfer surface.
Photo: Inaventa Solar
Automated absorber manufacturing consists of two major steps: First, an extrusion machine produces a long absorber mat with a row of small, parallel channels (see the photo above). This type of design increases the heat transfer surface of the absorber, as polymers have a lower heat transfer coefficient than metals. The mat is then cut to the desired length and the end caps are joined to the channels on the mat via infrared welding. The absorber frame itself is made of aluminium, while the cover can be either polycarbonate or glass. Solar Keymark certification is underway.

Extrusion process as a whole (left) and in detail (right)
Photo: Inaventa Solar
Together with Solvay in Belgium, Inaventa Solar has worked on optimising two custom-made polymers, a polymer called XE4510-BL for the absorbers and another called XE5430-BL for the end caps. “The materials can withstand 200 °C over short periods of time and can be exposed to 160 °C long term,” explained Skjelland.
Inaventa Solar‘s collector design was developed over two decades in close collaboration with national and international partners. In 2019, 3 Norske acquired the related technology assets and IP rights from Aventa Solar, a Norwegian company that closed down the same year.
The CEO of Inaventa Solar, John Rekstad, who used to lead Aventa Solar, assures that the know-how his former company gained from conducting R&D in this field over the years can be used effectively to grow Inaventa Solar’s business. Rekstad began investigating polymer materials suitable for solar application at Chevron Phillips Chemicals International more than 10 years ago and stayed on when Solvay purchased Chevron Phillips’ polyphenylene sulphide (PPS) unit in January 2015.

The Jevnaker factory was originally used as a barn before it was converted into a modern production hall. The building runs on solar energy and clean hydropower. A seasonal storage system drilled into the bedrock also stores surplus thermal energy generated by the building-integrated solar collectors in summer and waste heat released by the production line to provide additional heat for the factory and for a greenhouse.
Photo: Inaventa Solar
More information:
http://www.inaventasolar.com