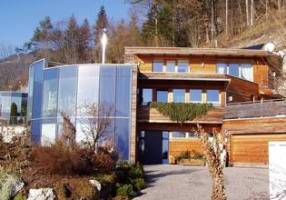 Solar showcase in Austria: This single family house in Tyrol generates a 30 % share of the domestic hot water and heating demand from renewable energies. Since 2008 more and more Austrian states have required an ecological heating system, if homeowners want to profit from housing assistance.
Photo: Austria Solar

Some European countries, such as Germany, Ireland, Portugal and Spain, already established renewable building codes on a national level. Austria has chosen a different path. Instead of an amendment to the existing building codes, which would make a share of renewable energy mandatory in new or refurbished buildings, Austria agreed on a regulation which is linked to the housing assistance programmes. The framework for this political instrument is an accord (paragraph 15a B-VG) between the national and the state governments to reduce the greenhouse gas emissions of the building sector. It stipulates that all Austrian states implement rules for paying housing assistance only if the heating system of the house fulfils certain ecological requirements.

Efficient oil/gas boilers with a solar thermal system are eligible in most states, as well as wood boilers, heat pumps and district heating. 7 of 9 Austrian states already approved these requirements last year (see the following table).

Austrian states that implemented requirements for an ecological heating system for new and refurbished residential buildings, wanting to profit from housing assistance. In most cases, the homeowner can choose between different heating technologies, one of them being an efficient oil/gas boiler combined with a solar thermal system.
Source: Solar