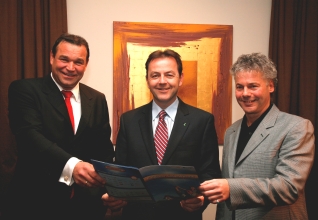 “Clever people heat with the sun” (Schlaue heizen mit der Sonne) is the slogan of the new solar campaign in Austria started on the 18th of February. A coalition of three organized this marketing campaign: the Federal Ministry of Agriculture, Forestry, Environment and Water Management, the national solar thermal industry association Austria Solar and the Austrian Climate and Energy Fund.

They intend to use the next few months until June 2010 to disseminate information about solar-driven water and space heating by giving out information leaflets, broadcasting radio and television spots, establishing newspaper partnerships, offering special activity days and setting up a hotline and additionally a web portal called http://www.solarwaerme.at.

"By increasing the use of technologies ‘Made in Austria’, we will also create green jobs in our country and come closer to my vision of energy self-sufficiency,” Niki Berlakovich, who heads the ministry leading the campaign, stated at the opening ceremony. His ministry provided a grant of EUR 400,000; an additional EUR 150,000 came from the national industry and Austria Solar.
“The highlight of the solar campaign will be the “Day of the Sun” at 7/8 May 2010,” Roger Hackstock, Managing Director of Austria Solar, explains. “Last year, 434 different events reached 40,000 people altogether”. Austria celebrated its first Day of the Sun in 2002. The idea has since spread throughout Europe and in 2010, already 16 countries are going to join the European Solar Days from 1 to 16 May.

Hackstock is also the initiator of the new national solar campaign. “It took me over a year to convince the government and the industry to join forces”. It marks an important milestone on the way towards reaching the campaign’s ambitious targets. “By 2020, we are to have a total of 26 million m2 of collector area in place, in order to cover 3 % of the total primary energy demand in Austria,” Robert Kanduth, Chairman of Austria Solar, announced. The current operation figures in Austria are at around 4 million m2.