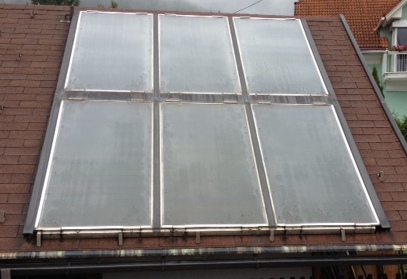 In a country with a high market penetration of solar water heaters and a decline in new installations, companies have to look for new business opportunities elsewhere. For example, Austrian installation company Mysolar specialises in replacing old solar water heaters which have been losing efficiency because of aging collectors. At a fixed price, the company will replace old collectors by new ones.
Photo: Mysolar

Managing Director Hannes Weiss founded Mysolar in summer 2014. Within their first year, the company’s five employees have already exchanged the collectors of about 120 solar heating and water heating systems. For 15 years, Weiss had worked in the solar thermal sector at a collector manufacturer, similar to most of his colleagues at Mysolar. “With Mysolar, we can directly address end customers, whereas collector manufacturers sell to installers and distributers,” Weiss says.
Partner companies to expand business
The company started out as a local supplier in the federal state of Carinthia (=Kärnten). In the meantime, Mysolar has partnered with installation companies in Styria, Salzburg and Upper Austria to extend its reach. Regarding other federal states, Weiss is still looking for companies to establish a partnership.
According to Mysolar’s website, the heater exchange can lead to a solar yield plus of “up to 50 %”. Weiss explains that this calculation is an estimate for old collectors, where the glass has become opaque and the systems are equipped with absorbers coated with black chrome or solar paint. “Most of the collectors which we replace are older than 18 years,” Weiss says. There is large potential for this kind of business in Austria. According to the 2014 market report Innovative Energietechnologien in Österreich, there were 661 MW (944,000 m2) of collectors installed between 1990 and 1997, which makes them between 18 and 25 years old in 2015. Twenty-five years is the usual economic life that the authors of the market report assume for a collector. “We also replaced some collectors which were older than 25 years, but those were mostly in very poor condition,” Weiss adds. Some of those old collectors are even from the time when groups of ecologically minded homeowners used to build their own solar collectors in the 1980s. Other customers replace their collectors after only 12 years. If collectors are more than 10 years old, they are eligible for federal and state solar heating incentives.
Subsidy to replace collectors older than 10 years
Between 1997 and 2009, Austrian collector installation figures grew almost steadily, reaching their peak in 2009. This means that the greatest potential for the replacement business is yet to be tapped.
Mysolar only gets involved in refitting the solar circuit including all its components, such as expansion vessel, pumps and safety valve. Storage, hydraulics and heating system are left untouched.
Offers with set prices for end customers can be found on the website. For example, Mysolar offers to replace two collectors at a set price of EUR 2,940, including installation. Old collectors are accepted as a down payment of EUR 100 each, which brings the price down to EUR 2,740. Collectors older than ten years are eligible for replacement subsidies. Customers ultimately pay between EUR 1,168 in Salzburg and EUR 1,644 in Carinthia. This means that compared to the initial price of the aforementioned example, customers save between 44 and 60 % on collectors and installation, depending on the federal state in which the systems was purchased. According to Weiss, the saving is usually between 40 and 60 %.
Refilling the solar circuit with antifreeze fluid and – if necessary – replacing pumps, expansion vessel and safety valve are charged separately.
Mysolar uses collectors with a highly selective coating made by the “world’s largest collector producer in St Veit” – in other words, Greenonetec – and gives a ten-year warranty on them. Old collectors are broken up into their components – metal and glass parts will be recycled, whereas insulation material has to be disposed of.
More information:
http://www.mysolar.at