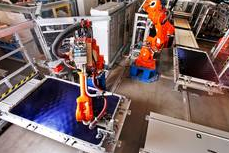 Austrian OEM collector manufacturer Greenonetec runs four robots at its new assembly line for tray collectors supported by seven workers. With a cycle time of around one minute, the highly automated production line is one of the fastest in the world.
Photo: Greenonetec

The high line speed is achieved by using four robots and a high degree of plant automation. Only very few processes require manual intervention: The first one is at the beginning of the line, when inserting the aluminium tray with the insulation layer. Further manual production steps include the following tasks: placing the absorber into the tray and removing the coating protection foil, as well as fixing the grommets on the tray. All other production steps have been automated, including the punching of holes into the tray and the application of primer and glue for the glass cover.

Even the serial number labels are added automatically. They are part of the advanced quality control system of the new line. “Every step of the collector assembly process is inspected and controlled by cameras,” Alexander Eichwalder, Director Sales & Marketing, states. “The recorded information can be traced by the individual serial number of the collector.”

According to Greenonetec, the annual capacity per shift is 150,000 collectors. Considering 260 working days a year with 8 hours each, a collector is leaving the line every 50 seconds.

The production plant was designed and developed in collaboration with another company from the province of Carinthia, which is not named. All in all, it took ten months from ordering the machinery to commissioning the line. The total investment for the machinery and the quality assurance measures including capacity adoptions at the manufacturing of semi-finished parts amounted to EUR 4 million.

With the new line, Greenonetec surpasses its own record regarding cycle times. The Austrian manufacturer already has an assembly line for frame collectors with an output of one collector panel every 1.5 minutes, which has been running since 2009. This line is equipped with four robots and operated by six workers. The manual production steps are the same as in the new tray collector line.