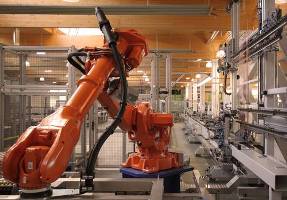 In March 2011, German machinery supplier Felss Burger GmbH delivered an automated bending machine for the production of serpentine absorber pipes to Austrian collector manufacturer Greenonetec. The machine achieves a high production capacity of 72 meanders (1.2 x 2 m2) per hour. A robot removes the finished serpentine absorber pipe from the machine, places it on a pallet, grabs a piece of cardboard and puts it on top of the pipes.
Photo: Greenonetec

“The development of the Greenonetec machine was quite a challenge”, Christian Jordan, Sales Manager at Felss Burger, says. “The special feature of the machine is its vertical bending system. The individual meander shapes are pulled vertically upward, whereas bending machines had so far formed absorber pipes on horizontal rotary tables. “The big advantage of the machine is its high process speed, and therefore the large quantities it can produce,” explains Jordan. Greenonetec is the second client for which Felss Burger constructed a vertical bending machine. The first was for a company from the refrigerator industry.

The bending centre has three bending heads. In a first step, a portal with the second bending head runs downwards below the horizontally placed straight pipe, reaches for it and bends it upwards. During the vertical movement the bending process takes place. Together with the two other bending heads at the left and right, one complete meander loop is formed simultaneously. The already bended loops are then fixed vertically in a special frame. Since only one meander loop is moved, no inertial forces and moments affect the arcs, Greenonetec explains the advantages of the machine in its April newsletter. The much smaller impact also has a positive effect on the absorber’s quality: It preserves tube geometry and prevents permanent deformations.

According to Felss Burger, the maximum length and width of the meander that can be produced with the machine is 1200 mm x 2500 mm or 2500 mm x 1200 mm. The machine bends one pipe at a time in a continuous process. It can process copper or aluminium pipes with a diameter of 8 to 12 mm and a wall thickness of 0.3 to 0.6 mm.