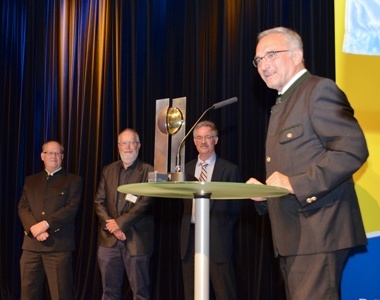 At the international conference Gleisdorf Solar in Austria, Austrian brewery Göss was presented with the SHC Solar Award, the “Oscar” of the solar heating and cooling industry. The IEA Solar Heating and Cooling Programme (IEA SHC) created this award to recognise outstanding achievements by suppliers or users of solar thermal technology. The photo shows master brewer Andreas Werner (right), who received the prize from the hands of Doug McClenahan, Chair of the SHC Solar Award committee (second from right), and Ken Guthrie, Chair of IEA SHC (second from left).
Photo: AEE INTEC
Göss, located in the Austrian town of Leoben, is “the first major green brewery in the world”, McClenahan emphasised. All of its process heat is generated by renewable sources, whether it’s solar energy produced by a 1,500 m² collector field, waste heat from the brewing itself or the neighbouring wood processing facility, or biogas created by the fermentation of spent grains and the waste water purification plant. The result is carbon-neutral brewing.
In its first year in operation from summer 2013 to summer 2014, the solar system delivered 527 MWh of heat (383 kWh/m² of aperture area) at an average temperature of 87 °C. This heat was used for mashing, where it covered 19 % of overall demand, and for hot water production for the boiler at the brewery. The rest of the heat was provided by an on-site biogas plant that delivers steam through a network of pipes.
The design for the system was developed under the auspices of the “green brewery” project managed by AEE INTEC.
This was the tenth time that the IEA SHC has honoured a company or organisation and recognised outstanding contributions to the solar heating and cooling sector. Since the first award in 2003, ceremonies have been held every year or every second year. The award has been presented to utilities, developers, builders and municipalities. In 2014, it was given to the French city of Montmélian la Solaire, and the year prior it had gone to the Drake Landing Company based in Canada.
This year, the committee decided to concentrate on the leadership qualities of private sector corporations and end users of solar thermal energy in utilising the technology. The next award ceremony is scheduled for 2017.
More information:
Green Brewery Project: http://www.aee-intec.at/index.php?seitenName=projekteDetail&projekteId=142&lang=en
Göss: http://www.goesser.at/
IEA SHC award http://www.iea-shc.org/solar-award