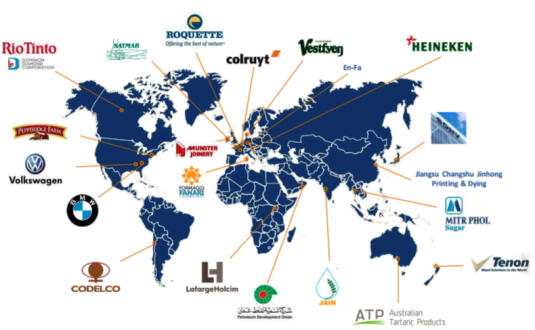 Three years after the International Renewable Energy Agency underlined in its June 2014 Renewable Energy in Manufacturing study the great potential for using renewables in industry, the International Energy Agency has published a comprehensive report on the same topic. It is titled Fostering renewable energy integration in the industry and consists of several documents divided into two parts: a review of 21 case studies on renewable systems integrated into industrial processes and a policy section identifying eight issues which may attract or deter industrial stakeholders intending to deploy renewable production assets at their facilities. Commissioned by the IEA Renewable Energy Technology Deployment Program (IEA-RETD), the publication was lead-authored by French-based ENEA Consulting. It is one of the milestones towards an IEA Insights Paper on Renewables in Industry planned to come out in November 2017.
Source: IEA-RETD
The authors of the report identified more than 200 projects in every industry and a broad range of renewable options before selecting twenty-one case studies for analysis (see the map above). Some of them deal with globally well-known solar process heat installations which had already been covered in articles on solarthermalworld.org:
A solar steam unit for cheese production at Nouva Sarda in Sardinia, Italy (2015); a system for enhanced oil recovery at Petroleum Development Oman (pilot plant from 2012); a vacuum tube collector field for dyeing at Changshu Jinhong Printing and Dyeing, China (2010); a flat plate collector field at Codelco’s copper mine in Chile (2013); and the world’s first carbon-neutral brewery, Heineke’s Göss factory in Austria (solar field from 2013). The other case studies describe the utilisation of biomass boilers, wind turbines, biogas CHP plants, PV generators and hybrid systems.
One important lesson learned from analysing the case studies has been that industrial process heat “brings direct benefits to the industrial players, beyond what could be expected from the simple purchase of renewable power”. There are other advantages:
The 60-page study explains in detail all eight issues identified based on the 21 case studies and gives policy recommendations to overcome them (see the attached document). That the authors of the report do not believe “renewable heat integration” in industry to be a mature technology is a bit surprising after the installation of more than 500 solar process heat systems around the world and four years of intensive research and market documentation within the IEA’s Solar Heating and Cooling Programme’s Task 49 on solar heat use in industry. But it illustrates the lack of technological awareness among stakeholders even within the IEA Technology Collaboration Programmes.
Loan guarantees instead of direct subsidies
In addition to technical challenges, the authors have identified several barriers linked to internal funding and long payback periods. They call on policymakers to look beyond direct investment subsidies towards innovative support policies. These could include loan guarantees covered by a dedicated fund, one of three policy recommendations mentioned in the chapter summarising the report. The idea is to offset financial risks associated with such projects and to lower a project developer’s cost of financing by keeping interest rates down. The overall objective is to create the trust investors need to add renewable energy assets to their factories.
http://iea-retd.org/archives/publications/re-industry
https://solarthermalworld.org/wp-content/uploads/2017/07/re-industry-final-report-1.pdf