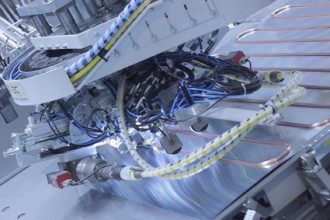 Austrian collector manufacturer Tisun GmbH started operating a new type of absorber production machine at the beginning of November 2011. Developed and delivered by Austrian machine supplier DTEC GmbH, the special feature of the machine is its ability to bend and laser-weld parts in a single production step. “We have patented the three-dimensional head which bends, forms and welds the piping to the absorber plate,” explains DTEC’s Managing Director, Michael Dietl. The photo shows the multi-functional laser head with its tools installed in the factory.
Photo: Tisun

The machine, type Pulsspeed 278/556 Bender, is the first of its kind. One employee is enough to operate it. According to a press release from Tisun, both Austrian companies jointly developed the machine during a period of 12 months. “The machine manufactures complete and tested absorbers of any design and material – copper, as well as aluminium plates or pipes,” explains Dietl.

The machine is automatically fed from the coil. The pipes are trimmed and the laser head tools fix the pipes onto the absorber plate. Afterwards, the head bents the pipe according to CNC parameters without an extra bending head and, at the same time, welds it using optics by German company Trumpf. DTEC has integrated a device into the machine which supplies the manifold pipes automatically and solders them to the serpentine pipe. “Pipe feeding can be turned off if required and then reset to manufacture the harps,” Dietl adds.

According to the General Director, the machine with one laser head and optical splitter for both optics (model 278) can have a capacity of more than 7 metres piping per minute, with two sources (556) more than 14 metres per minute. Its special feature is the three-dimensional bending arm and the flexible laser head, which allows welding in the curves of the meander without risking deformation.

The Pulsspeed 278/556 Bender has now made Tisun an all-in-one collector manufacturer. The DTEC machine was delivered at the beginning of October and started operating four weeks later. So far, the company had purchased the absorbers from OEM suppliers. Tisun’s management has declined to reveal the precise amount of its investment, but announced instead that the total costs for the absorber manufacturing unit added up to millions of Euros.

All in all, the Pulsspeed 278/556 Bender is certainly the most extraordinary machine in DTEC’s portfolio. The company offers all types of machinery required to manufacture collectors. This includes pipe handling systems for drilling and punching, soldering systems with different levels of automation and laser-welding systems. Just recently, DTEC has completed and optimised two fully automated soldering machines for Greenonetec, Europe’s largest absorber and collector manufacturer.