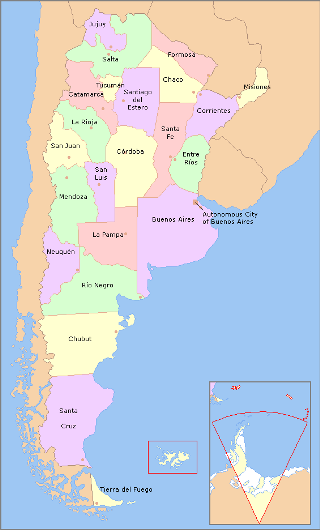 In Argentina, Jorge Follari of Innovar SRL observes a rising interest in solar thermal energy. The federal and the province governments support the installation of solar water heaters in rural schools, and the interest of private customers grows, too – especially in the northern provinces, such as Corrientes, Salta, Tucumán, San Luis, Santa Fe and Catamarca. Compared to the commonly used gas bottles, a solar system pays off in 2 to 3.5 years. On the other hand, gas and electricity are highly subsidised.
Map: Wikipedia Commons/Bleff

Argentina’s solar thermal industry is a small one in total numbers: In 2010, Innovar produced 680 m2 of flat plate collectors and is – according to its own statement – the country´s biggest collector manufacturer. “But the market is slowly waking up,” Follari says. For 2011, he has noted an increase in collector sales.

In Follari’s view, the main obstacle to solar in Argentina is the support of gas and electricity. The subsidy schemes for these energy sources were launched after the economic crisis of 2001, with the intent to keep gas and electricity affordable despite high inflation. Whereas electricity is almost free for private customers (0,03 USD/kWh), solar has a good chance to compete with the commonly used gas bottle, which costs around 3 USD/kg (0.30 USD/ kWh) despite subsidies.

Until now, however, solar energy can only count on very little subsidies and support programmes. “The interest is rising in the northern provinces, such as Corrientes, Salta, Tucumán, San Luis, Santa Fe and Catamarca,” Follari says. Heating water for schools in villages is a typical application area of Innovar’s solar water heaters. The schools are in very remote areas. The children stay overnight several weeks of the year, because the streets are in bad shape and there is no public transport system.

Actually, PERMER’s main focus is on electricity. The project is financed by the World Bank, the Global Environment Facility (GEF) and the provincial governments.  The companies – such as Innovar – provide their service through concession. They take over one third of the initial investment costs in equipment and civil works, and get back their investment through the users’ monthly payments for the service.

Before December 2011, Innovar will have also installed 22 solar water heaters for rural schools in the province of Salta. The solar water systems for these schools are financed by the Salta Secretary of Energy and the Inter-American Development Bank.

And, Innovar has set up some prestigious projects in Argentine’s cities, such as the two solar water heating systems on the new building of the Ministry of Science, Technology and Innovation in Buenos Aires. Other examples include a 25 m2 system for sanitary hot water at the Las Parejas hospital in Santa Fe, as well as a hybrid system, which consists of 85 m2 of solar collectors and a heat pump for space and water heating.

Innovar’s collectors come with stainless steel absorbers in different sizes. The steel sheets are soldered at the sides, which gives the collector a large contact area between the absorber sheet and the heat transfer fluid. According to Innovar, the collectors are flexible enough to withstand even freezing temperatures. Besides producing their own collectors, Innovar imports vacuum tube collectors from China, which have become very popular among its clients – which is why the company went as far as to reduce the flat plate collector area produced in-house in 2011 and sell the imported vacuum tube collectors instead.

As Argentina stretches almost 4,000 km from north to south, the climatic conditions for solar energy depend very much on the precise location of the system. Compared to other South American countries, the conditions are not that good: For example, the capital Buenos Aires has a daily insolation of 4.39 kWh per m2, Córdoba further in the north gets 4.88, and Río Gallegos in the south receives only 3.17 kWh per m2 and day.