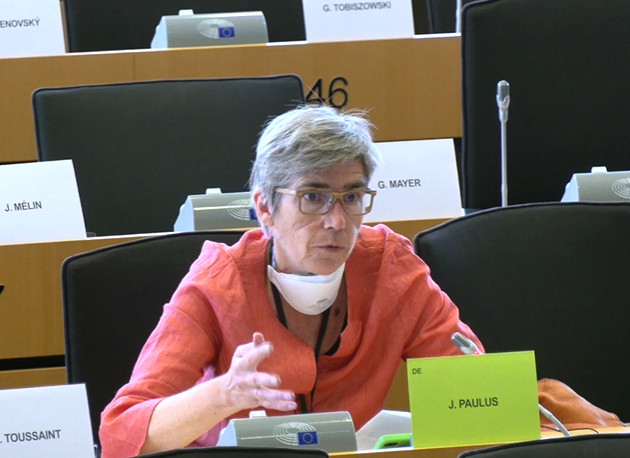 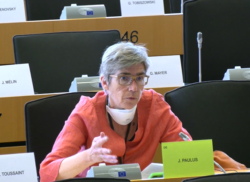 At a meeting on 27 June, the EU Committee on Industry, Research and Energy (ITRE) discussed the role of solar heat in the Union’s Solar Energy Strategy, published in mid-May. Although the strategy has the status of a non-binding communication disseminated for informational purposes, it is considered to be an important road map for PV and solar thermal contributions to EU climate goals. However, as Green Party and European Parliament Member Jutta Paulus (see photo) pointed out at the ITRE meeting, most comments and figures included in the strategy focus on PV only. Hence her subsequent question to Mechthild Wörsdörfer, Deputy Director-General of the European Commission’s energy directorate, whether the commission had “similar plans and ideas for solar thermal”.

Two images are screenshots taken from a publicly available recording of the meeting https://multimedia.europarl.europa.eu/en/webstreaming/itre-committee-meeting_20220627-1500-COMMITTEE-ITRE

After all, solar thermal had a “very long history” and could not only provide “very cost-effective support for water and space heating” but also “aid the district heating market”, Paulus said. Wörsdörfer assured her that she wants solar heat to be given as much attention as solar electricity. Even if the current strategy doesn’t set a clear target for solar heat, “its use should at least triple by 2030”, she replied. The Solar Rooftops initiative for retrofitting old and new buildings, Wörsdörfer continued, was open to both PV and solar thermal technologies, for example. 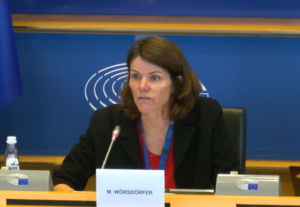 We talked with Jutta Paulus after the meeting about what role she believes solar heat could play in transforming the energy sector. “In light of persistently high prices for fossil energy, I consider a tripling of solar thermal energy capacity within this decade to be quite realistic,” she said. She then mentioned the solar mandate for newbuilds for which the European Commission doesn’t distinguish between PV and solar thermal. “From where I stand, the things to focus on would be a significant reduction in cost and the transfer of expertise, for example, in combining solar thermal and heat storage,” she continued.

Paulus also has an explanation for why politicians and the public associate solar energy mainly with PV. “PV is a versatile form of energy that is easy to transport, whereas solar heat can basically only be used locally. Moreover, solar thermal systems often yield high surpluses in summer but you’ll need an additional heat source in winter.” However, she is optimistic that “high gas and oil prices will boost interest in solar thermal. So far, long payback periods have kept many from investing in solar collectors.”

To achieve its ambitious climate targets, the EU needs to take a closer look at every opportunity for renewable energy production, Paulus is convinced. “If solar thermal is viable enough to act as a backup system for district heat in Denmark, it should be an even bigger benefit in regions to the south. And in areas where temperatures remain above zero in winter, you might even be able to use very simple technical solutions.”

Jutta Paulus has high hopes for the solar thermal market considering the commission has declared its intention to promote prosumers and energy communities more aggressively. The prosumer and energy community rights incorporated into the Renewable Energy Directive cover both solar thermal and PV projects, although energy cooperatives have focused primarily on electricity generation because the market is more readily accessible.

“When it comes to solar thermal, we’re talking about either comparatively small amounts of household energy or a relatively complex network of district heat. This isn’t so much a legislative as it is a structural issue,” Paulus said. She added that she, for one, would be grateful for suggestions as to how the European Parliament could support the use of solar heating and cooling by prosumers in energy communities.

Regarding the need for national and European policies to protect solar thermal manufacturers in Germany and other EU countries against the cut-throat competition from China, she suggests that the Union consider which technologies and production sites need to be designated “critical infrastructure” to ensure local production, at least to meet some of the demand. “Introducing a formal measure against dumping, which gravely affected the PV market at one point, takes a very long time and isn’t necessarily crowned with success. In my view, it would be better to offer public sector contracts or provide financial support to strengthen domestic manufacturers.”

Paulus also said that the combination of solar thermal and heat pump technology offers great potential, as the pumps could then generate high coefficients of performance and make even industrial application conceivable. She added: “We’re still at the very beginning, as low prices for fossil fuels have prevented investments in these technologies.” 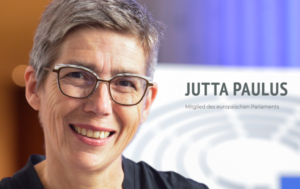 Jutta Paulus has been a member of the German Green Party since 2009 and the European Parliament since July 2019. From 1986 to 1990, she studied pharmacy at the university of Marburg. In 1991, she founded a laboratory for the analytics of indoor pollutants and ecotoxicology. Paulus sold her shared in the company in 2012 and started to go into politics. More information: https://www.jutta-paulus.de