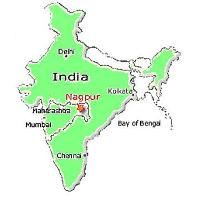 Nagpur city in central India – one of 60 solar cities in India supported by the government.

An ambitious programme by the Indian federal Ministry of New and Renewable Energy (MNRE) will make Nagpur city a model solar city by 2012. The city, located in the state of Maharashtra, central India, and famously known as the “Orange City”, plans to cover up to 10 % of its energy demand via renewable energy sources and implement other energy efficiency measures as well. Commercially viable technology, like solar thermal heating systems, will therefore play a key role in meeting this target. It will be especially useful in “green buildings” that the government wants to promote on a large scale.

Nagpur plans a creating a byelaw that makes the use of solar water heating systems mandatory with certain categories of buildings. The solar city scheme of MNRE will also provide a rebate in property tax to users of solar water heaters, particularly within the domestic sector.

The government of India plans to develop 60 cities of that kind during the 11th Five Year Plan (2007-12), to both meet the increasing electricity demand of its cities and promote the growing use of renewable energies. 300 million Indian Rupees (INR) (€6million) are expected to be spent during the 11th Plan period, under a programme called “Development of Solar Cities”. The amount will be taken from the allocated budget for solar thermal energy programmes under the MNRE’s demands for grants.