A 10 MW flagship solar heat project was inaugurated on 20 September 2021 in Issoudun, Southern France, making it the largest solar industrial heat plant in France and the second largest in Europe. The 14,252 m2 solar collector fields now supply 10 % of the total heat requirement of the malt production factory of Boortmalt (right on the photo), one of the world leaders in malt production with a total production capacity of 3 million tonnes in 27 malt houses around the world. “Our goal is to reduce CO2 emissions by at least 50 % by 2030 across Boortmalt´s activities worldwide, in line with the Paris climate agreements,” said Yvan Schaepman, CEO of Boortmalt during the inauguration. The solar industrial heat plant also showcases an innovative business model. The France-based third-party investor, Kyotherm, has co-developed and financed the plant and signed a 20-year solar heat delivery contract with the factory as an energy service provider.
Photo: Kyotherm
This business model has been made possible by substantial support from the French energy agency Ademe, which allowed Kyotherm to offer a competitive solar heat price to the malting plant. Ademe provided a non-refundable grant of almost EUR 3 million, as well as reimbursable aid amounting to EUR 0.5 million, covering 58 % of the EUR 6 million CAPEX spent on the solar field, the 3000 m3 storage tank and the integration into the factory´s hot air system.
The SHIP plant now completes Boortmalt’s objective of covering 50 % of the heat requirement from sustainable sources, as the factory already produces 25 % of its heat with a biomass boiler and 15 % using waste heat from a co-generation unit. Boortmalt is a subsidiary of the Axéréal group, a French cereal cooperative that brings together 11,000 farmers and 4,000 employees and has a turnover of around EUR 3 billion.
Operated by remote control
The solar field delivers 60 to 90 °C hot water, which is stored in a 3,000 m3 above-ground steel tank. The trial operation since the beginning of the year has verified the annual yield of 8.5 GWh, which corresponds to a specific yield of 596 kWh/m2, confirmed Kyotherm´s Investment Director Rémi Cuer on request. As part of its project management contract for the plant construction and its operation and maintenance mission, the French company NewHeat guarantees the solar yield to Kyotherm Solar, the owner of the plant. According to Cuer, NewHeat operates the plant by remote control and relies on local companies for onsite operations. The turnkey supplier of the collector field was the Finnish company Savosolar. 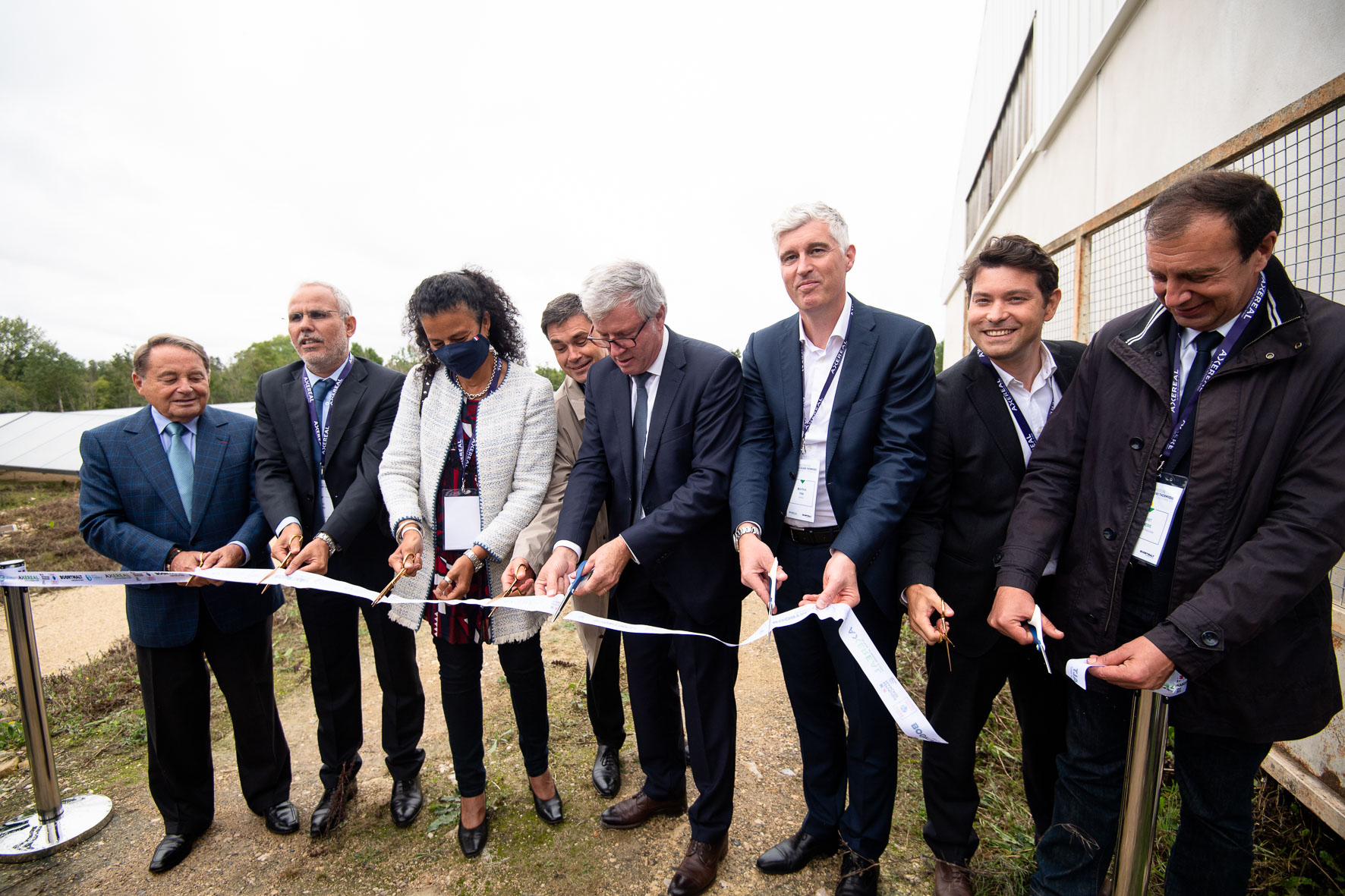 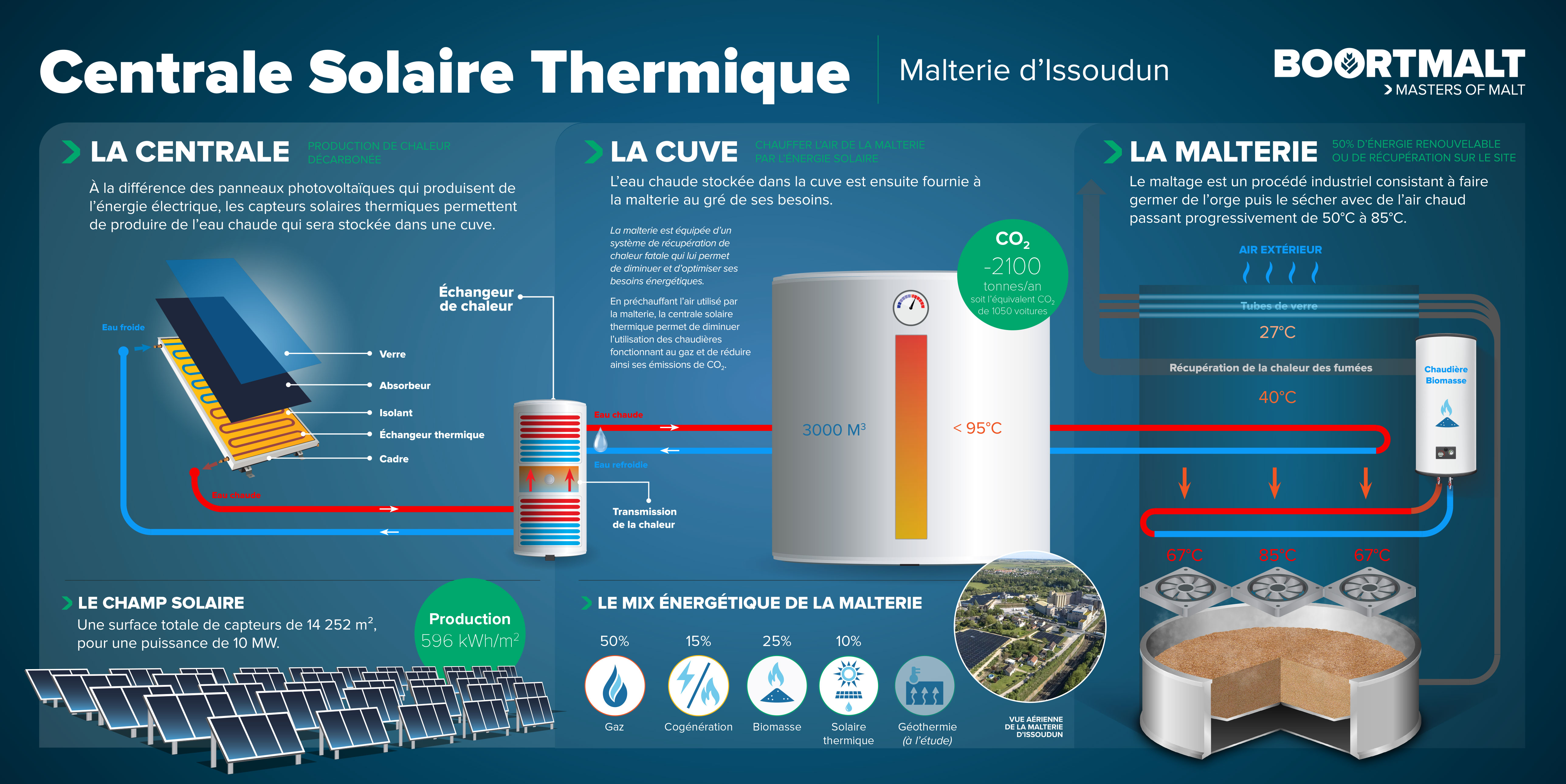 Air is used to supply heat for the drying of grains to produce malt. The outside air is first preheated by waste heat from the malt drying process and the exhaust fumes of the gas boilers to around 40 °C. It is then heated by the solar tank to the required 67°C. During the night and low-irradiation periods, backup energy for air heating comes from the biomass/gas boilers and the cogeneration plant.
Graphic: Boortmalt
Prefabricated turnkey solar station 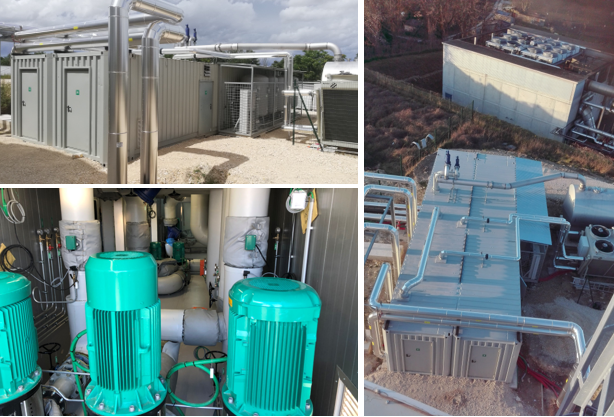 The prefabricated solar station is fitted in two containers viewed here from different sides. A large amount of pump capacity is necessary to operate the solar heat plant: 3 x 45 kW-pumps for the solar field circuits (1 per circuit + 1 backup), 2 x 18 kW-pumps for the secondary circuit between storage and heat exchanger (1 + 1 backup), and 1 x 45 kW electric pump for the delivery to the factory.
Photos: Sunoptimo
The Belgian company Sunoptimo was assigned to deliver the prefabricated solar station managing all heat flows between the field, the storage tank and the factory including the monitoring devices and safety functions like freeze protection and expansion vessels etc. The solar circuit is run with a type of glycol which freezes at -5°C, therefore additional freeze protection is needed and is insured by the solar station.
“We integrated the complete hydraulic and measuring system into two 40-foot containers, which were assembled in our factory,” explained Jérôme Delooz, Marketing Manager of Sunoptimo. The company has already delivered containerized solar stations of the type Opticube Field for two solar district heating plants - one in Ettenheim, Germany, and the other in Creutzwald, France.
But the size of this turnkey solar station in Issoudun exceeds the previous projects by far. “Everything was bigger here than usual, the pipes, the pumps, the containers, so this was a logistical challenge in our workshop and warehouse”, commented Delooz. Besides this, the number of involved companies was much higher, which can lead to difficulties and challenges regarding coordination, information flow, deadlines and so on, added Delooz: “So we are very proud to have one of our Opticube systems on the largest solar thermal plant in France and we are also in contact with several other collector and turnkey suppliers to work on other large solar heat projects like the one in Issoudun.”
Websites of the organizations mentioned in this article:
https://www.boortmalt.com/en
https://www.axereal.com/
https://www.kyotherm.com/de/
https://newheat.com/en/
https://savosolar.com/fi/
https://www.sunoptimo.com/en
Process Heat
Finance and Incentives
France
Finnland
European Copper Institute
Kyotherm
Boortmalt
Savosolar
Sunoptimo
NewHeat
Axereal