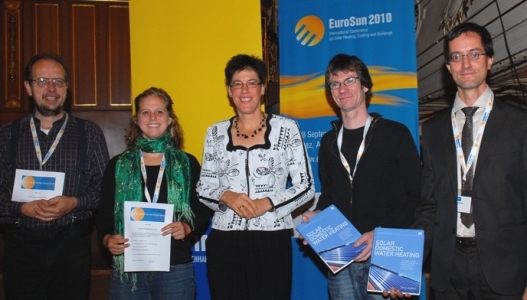 The winners of the solarthermalworld.org quiz were announced on 1 October, at the end of the Eurosun 2010 conference in Graz, Austria. The photo shows the lucky participants (from left): Matthias Gebauer (Ecoscop), Veronika Schweinzer (University of Graz), Bärbel Epp (editor of solarthermalworld), Jens-Peter Meyer (editor of Sun & Wind Energy) and Philip Ohnewein (Solid).
Photo: Eurosun

The first prize went to both Matthias Gebauer (Ecoscop) and Veronika Schweinzer (University of Graz), who answered eight out of nine questions correctly.
They each could choose between tickets for one the following conferences organized by Solarpraxis AG, Germany: CIS-ES 2010 in Madrid, 11th Forum Solarpraxis in Berlin, CIS-IT 2011 in Rome and SMEThermal 2011 in Berlin.

In the short time Eurosun participants had to complete the quiz, seven questions were correctly answered by: Jens-Peter Meyer, Roberto Fedrizzi (Eurac) and Philip Ohnewein. Each of them received a copy of “Solar Domestic Water Heating”, sponsored by British publisher Earthscan.

The quiz consisted of nine multiple-choice questions asking about solar thermal in general, technical issues, as well as the website solarthermalworld.org. A few examples:
• The oldest solar collector manufacturer is based in which country?
• In which of the following countries is the biggest solar hot water plant under construction?
• What is a getter?
• Which country is the first non-European country that wants to implement the Solar Keymark?

Only Eurosun participants were able to fill in the quiz form.