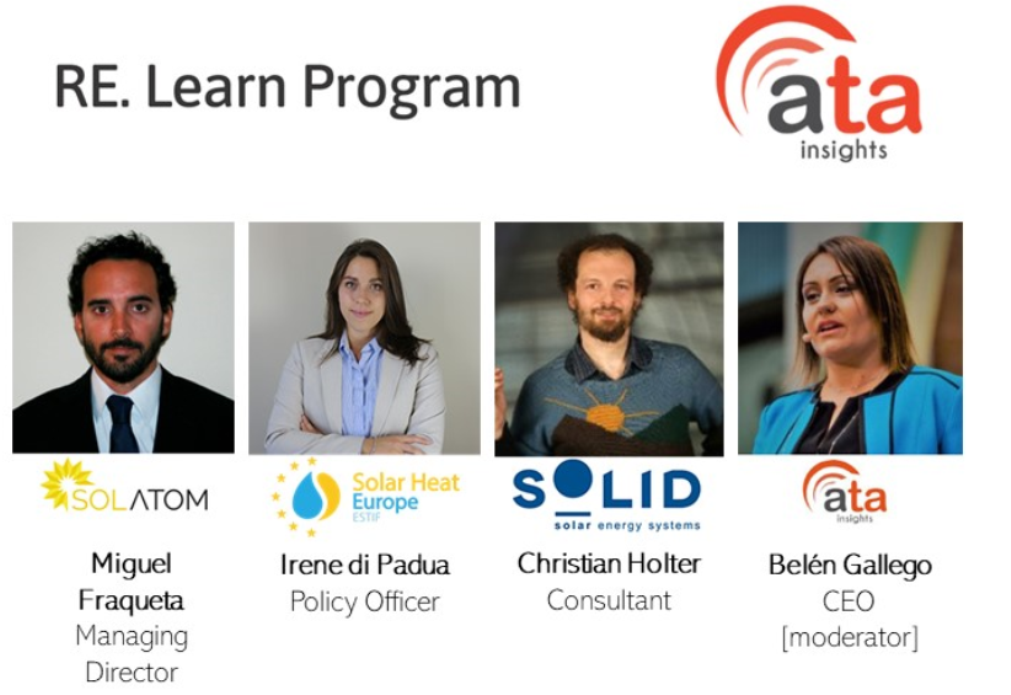 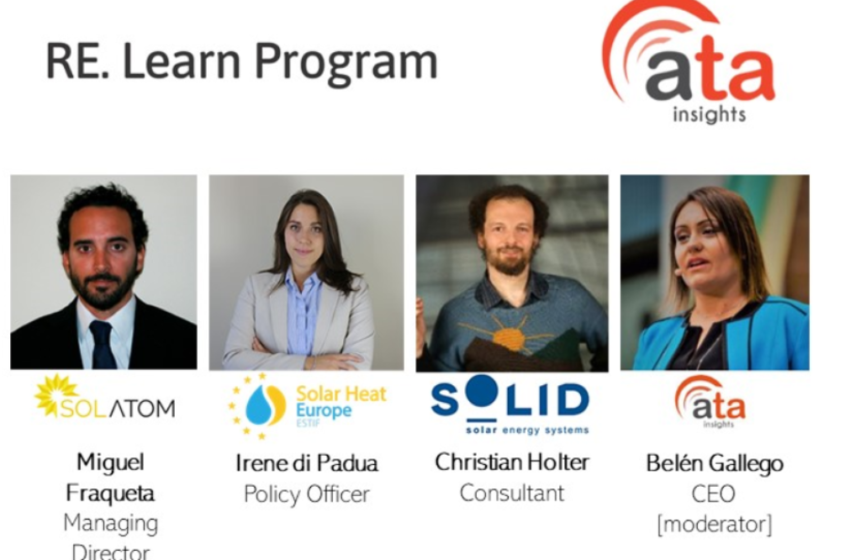 Since the beginning of this year, Ata Insights has been running a monthly series of webinars about solar industrial heat (SHIP). The third webinar, titled Opportunities for solar heat in Europe, will be held at 12:00 CET on 19 March. The aim of this series is to illustrate the huge potential for SHIP in the industrial sector and to present real-world case studies that show how solar heat can help decarbonise the sector in a cost-effective way. Ata Insights is a Spanish-based renewable energy consultancy that organises about 100 webinars a year. Solarthermalworld.org is the media partner for this new series of events.
Source: Ata Insights
“Our first two events in this series have already featured presentations by very experienced SHIP system suppliers and market experts,” said Araceli Giner, Marketing Manager at Ata Insights. “As interest this topic has been very high, we usually have several hundred people register for our webinars on heat technology.” All of the company’s webinars are free of charge and are an hour long. Usually, two or three speakers share their insights with the audience before a comprehensive Q&A session moderated by Belén Gallego, Ata Insights’ CEO, is used to reply to comments from viewers.
In the webinar on 19 March, Miguel Frasquet, of Solatom, a Spanish-based supplier of Fresnel collector systems, Irene di Padua, Policy Officer at Brussels-based Solar Heat Europe, and Christian Holter, CEO of Austrian company Solid, will analyse EU policies that could drive demand for SHIP and will explain the impact which substituting conventional fuel with green energy has on the payback periods and costs of installations (register online here). If you want to receive regular invitations to the company’s webinars, you can subscribe to its newsletter.
Recordings, presentations and, if the event was held in English, automated transcription are likewise available online. The first two events in the new series were Solar for commercial and industrial heat, which was held in English on 30 January 2020 and a Spanish webinar titled Oportunidades para la Generación de Calor Solar en LATAM.
Industrial solar heat solutions: cost benefits
During the webinar held on 30 January, two SHIP solution providers, Protarget based in Germany and TVP Solar based in Switzerland, presented typical projects, revealing what they cost and how much energy they have saved.

Martin Scheuerer, Commercial Director at Protarget, a manufacturer of parabolic troughs, compared the operating costs of a typical oil-fired 5-tonne steam boiler with a same-capacity solar system that produces steam for industrial processes. The solar energy system will save a factory EUR 0.5 million a year if the price for one tonne of oil is EUR 700. The annual running costs of the solar system are estimated at EUR 50,000 (2.6 % of installation costs), which is spent on maintenance and cleaning the mirrors.
An even more important fact, according to Scheuerer, is that the investment will pay back in three or four years and that the client can expect further savings thereafter. “The owner in this example can count on net savings of EUR 4 million in the ten years after investing in the solar system,” he said.
Economics of a parabolic trough collector system which generates 5 tonnes of steam an hour and provides the heat previously supplied by an oil-fired boiler
Source: Protarget
Ultra-low maintenance costs
TVP Solar offers evacuated flat plate collectors that supply heat to industrial processes requiring temperatures of 60 °C to 180 °C. During the webinar, Guglielmo Cioni, Vice President of Business Development at TVP, presented the key data that his company had gathered on a 3,000 m2 solar field consisting of TVP collectors (see table below). CAPEX has been set to 500 EUR/m2, while OPEX is relatively low, at EUR 9,300 annually, which is only 0.6 % of total investment costs. Cioni said the advantage of using a TVP solar field is that the collectors do not need cleaning. “Even after running tests in Saudi Arabia for a year, when we did not clean the collectors even once and efficiency dropped only 7 % in the last four months,” he explained. His rule of thumb on O&M costs is EUR 3 per m2 of collector area. Even without incentives, solar thermal systems can produce heat at a cost of 25 to 40 EUR/MWh, depending on where they have been installed.

Financial values of TVP industrial solar heat systems. Lifetime is assumed to be 25 years, while the cost of financing has been excluded from this feasibility analysis.
Source: TVP
Companies mentioned in this article:
https://atainsights.com/
https://protarget-ag.com/en/
http://www.tvpsolar.com