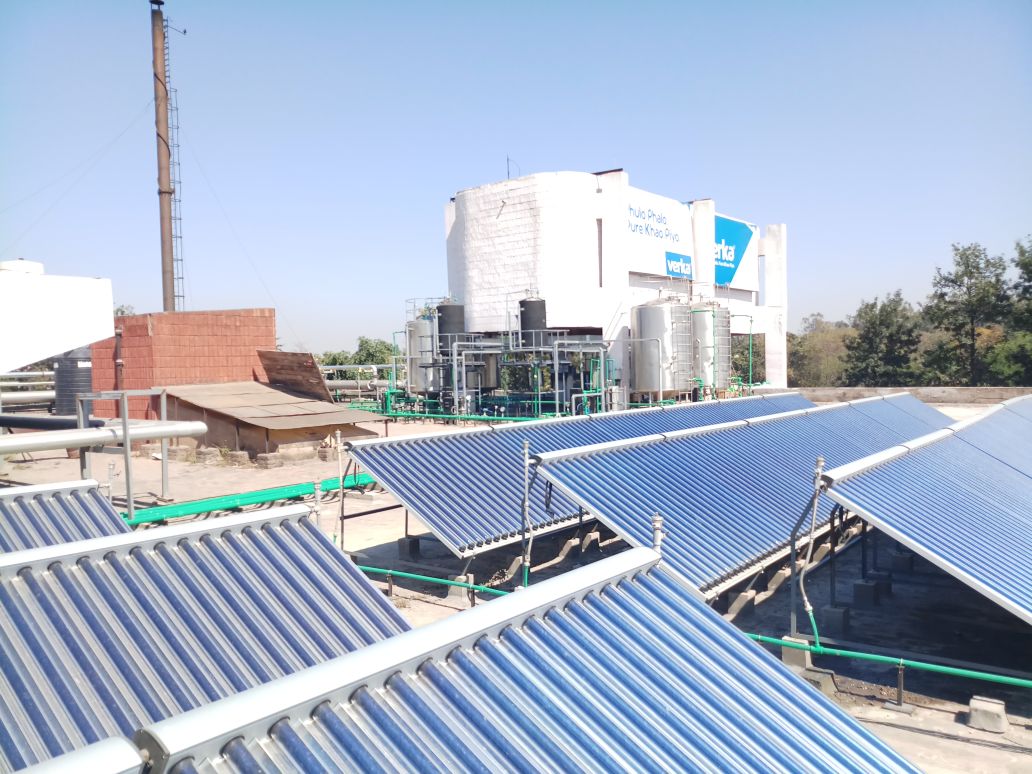 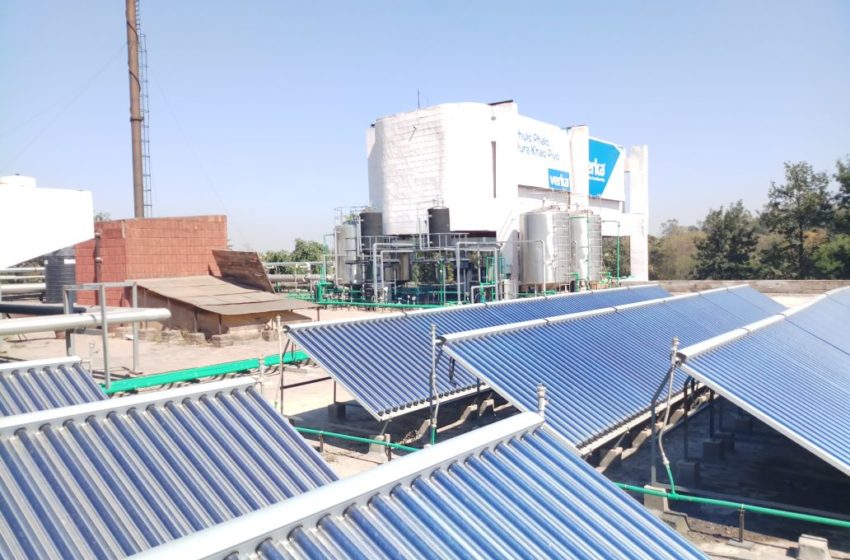 Concentrating solar thermal technologies continue to flourish in India. The Ministry of New and Renewable Energy has reported to have received concentrating solar thermal applications worth more than 10,000 m2 since the national subsidy scheme was extended in February 2018. Most applications were about solar heat for industrial processes, also known as SHIP, and cooling. Vacuum tube collectors with CPCs, short for compound parabolic concentrators, are one of the technologies eligible for the scheme and took the lion’s share at nearly 80 %.
Photo: Thermax
A survey among Indian suppliers of concentrating solar systems has shown that a rising number of companies – start-ups and first-generation entrepreneurs alike – had been entering the market for this technology.
For example, the SHIP projects completed by Oorja Energy, a clean tech heating and cooling supplier, had topped 2,000 m2 of collector area by then. All of those use vacuum tubes with CPC. A 540 m2 system recently installed at Tata Motors has revealed that CPC mirrors require short maintenance intervals due to dust accumulation. “To overcome the problem, we’ve covered our CPC collectors with toughened glass, which will have a marginal impact on conversion efficiency,” noted Oorja´s Managing Director Madhusudhan Rao.
In addition, Soft Tech Renewable Energies, also known as STRE, has been offering concentrating dishes for applications as varied as cooking, process heat, air conditioning and steam production over the past 12 years. The company’s management said that orders totalling 3,000 m2 of collector area were in the pipeline. The largest of those projects included 100 dishes measuring 16 m2 each. The system would be used for electroplating and become the biggest for this sort of application in India. The dish ‘collector’ area is defined as a rectangular area limited by the solar field’s perimeter. The company is being promoted by the First Generation of Entrepreneurs programme in India.
Furthermore, Sudhir Sarawat, Director at Greenlife Solutions, announced that his company had received an order for designing a beverage business’s preheating system. The vacuum tube-CPC area would measure about 2,300 m2. He added that the market was worth a try, but that the technology would remain confined to niche applications.
Renewed interest as oil prices on the rise
Thermax has stated that it would be participating in a request for tenders about nearly 2,000 m2 of concentrating solar thermal systems, to be installed in the dairy industry. A spokesperson for the company said that there had been renewed interest in solar heating in the industrial sector, as oil prices were on the rise.
And Solwedish Solar is currently revamping a solar thermal cooling system which has been running for 10 years at a municipal hospital in Thane in western India. Madan Mohan Reddy, Founder and Managing Director of Solwedish Solar, said that the size of the planned installation was 576 m2 and that it would use square dishes, complete with dual-axis tracking.
By contrast, Rajesh Verma, Managing Director of mirror manufacturer ARS Glasstech, said business had slowed down after last year’s delay in subsidy approval. He hoped that some of the announced large-scale installations would reinvigorate their business.
HUL, short for Hindustan Unilever Limited, a Gujarat-based manufacturer of personal care products, has recently commissioned a 1,020 m2 SHIP plant that uses vacuum tubes with CPC. In the first 12 months of operation, it is said to have saved its customer close to 70,000 litres of diesel. HUL ranks eighth on Forbes’ list of the world’s most innovative companies in 2018.
Indian companies have also made an inroad into the realm of SHIP exports. For example, Orb Energy has planned and commissioned projects for a leading multinational corporation that manufactures household products in Myanmar, Kenya and Ghana. These three projects alone totalled 2,140 m2 of collector area.
The continuation of the capital subsidy scheme has been encouraging news for technology suppliers. The 20,000 m2 target for the current financial year seems to have already been exceeded and the 90,000 m2 one might be achieved before the 2022 deadline.
Organisations mentioned in this article:
http://www.oorja.in
http://www.stre.co.in/about.html
http://www.sme.in/greensolution/contact.html
http://www.thermaxindia.com
http://solwedish.com/company
http://www.arsglasstech.com
https://www.hul.co.in