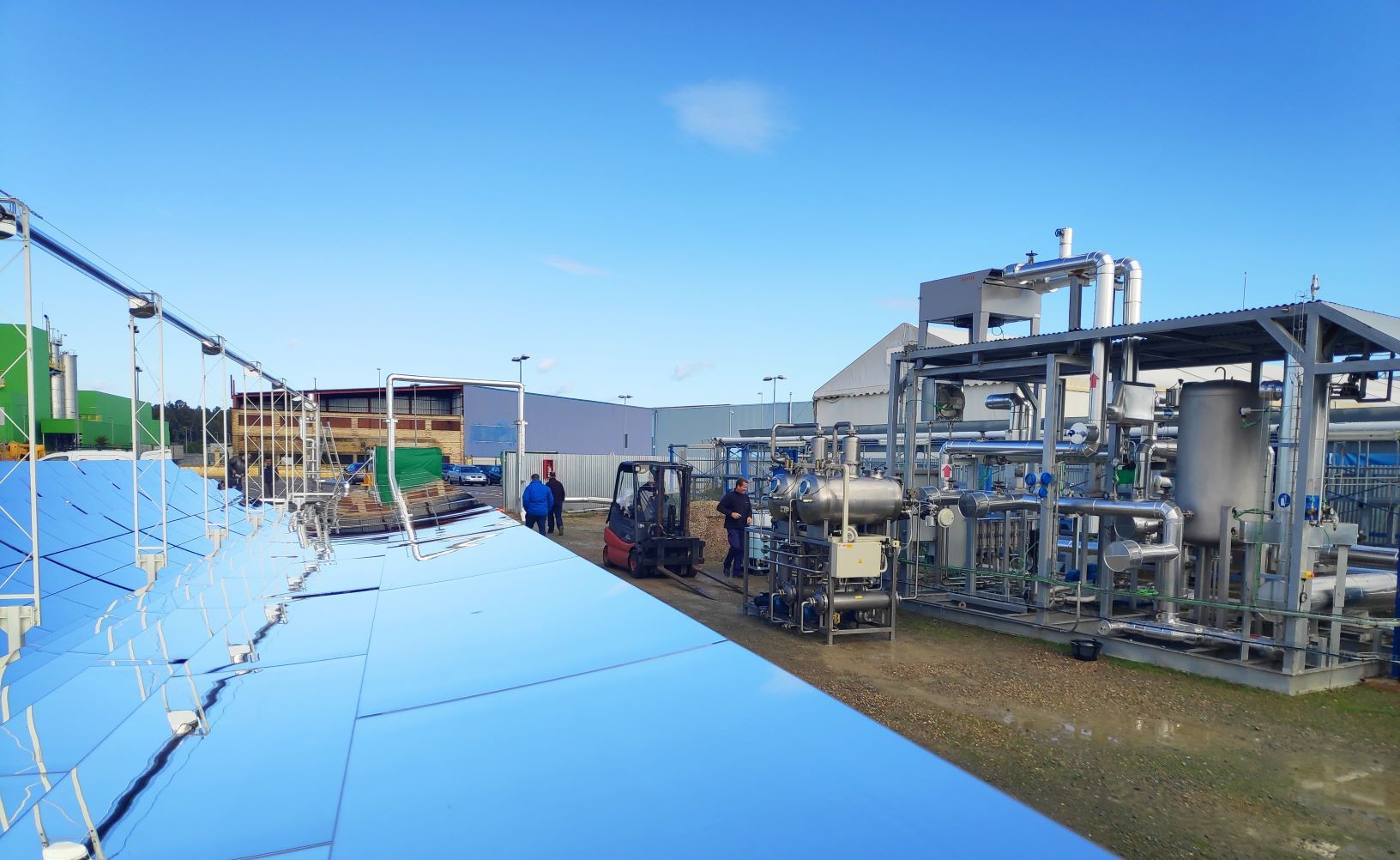 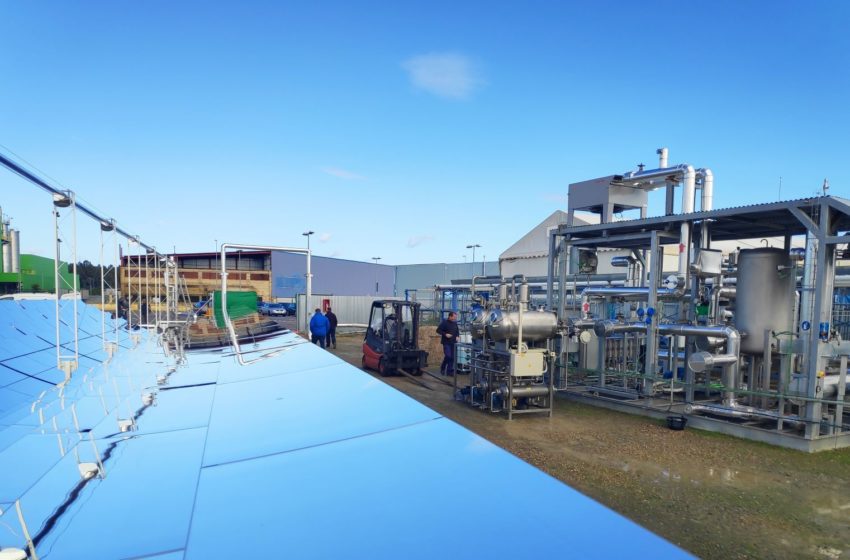 Manufacturers have begun looking for solutions to lower the cost of wastewater disposal. One way for them to reduce the volume of contaminated water is to evaporate water on site by using solar steam. In early 2019, Rioglass Solar, a supplier based in Spain, installed a solar steam system at the Los Frailes copper mine near Seville to test the feasibility of the process. The Fresnel collectors that are part of the system supply thermal energy to a double-effect evaporator which produces distilled water and reduces the proportion of waste heat to 10 % (see photo). Rioglass Solar is one of the industrial members of Task 62, Solar Energy in Industrial Water & Wastewater Management, a research platform set up by the IEA Solar Heating and Cooling programme.
Photo: Rioglass
“We would like more people to learn about the advantages of our technology, as only a few industrial clients know about this new approach,” Pablo del Prado, Group Projects Manager at Rioglass, said when he was asked why the company joined Task 62. “We have also partnered with two research institutes participating in Task 62 to develop membrane distillation units powered by solar heat.”
Pilot plant for Zero Liquid Discharge
After a major accident a few years ago, the Los Frailes mine has been subject to very strict rules on wastewater disposal. At that time, the tailings dam burst and a large amount of wastewater was released into the environment. As a result, the company owning the mine was forced to store millions of litres of polluted water on the property and to look into cost-effective ways of removing it from the mining area. Management considered using chemical solutions for purifying the water but had to dismiss the idea because of the high costs involved.
The search for an alternative ended when the company found a sustainable solution named Solarvap, a solar-powered wastewater evaporation system jointly designed by Rioglass and Condorchem Envitech. The system is based on two technologies: Fresnel collectors made by Rioglass and traded under the name Sun2Heat and a modular, multi-effect evaporator manufactured by Spanish-based Condorchem. Solarvap produces distilled water as part of a continuous process.
During the process, overheated fluid from the solar field is used to boil wastewater at 90 °C in a vacuum (700 mbar) inside a container (see graphic below). The vapour resulting from the first evaporator unit, is then transferred to a second container. There it condenses to form distilled water while the thermal energy is used to boil wastewater at 70 ºC in a higher vacuum (320 mbar). Afterwards, the newly created vapour is led from the second container to an external air cooler to let it condense into distilled water. Process parameters and temperature levels need to be adjusted based on the sort of wastewater a customer is using. The modular architecture of Solarvap allows for the installation of up to seven evaporator units within one system.

This image shows the first evaporator unit with the solar-powered heat exchanger. The evaporator has been designed by Condorchem Envitech, which has reportedly completed over 400 projects at locations around the world.
Image taken from Solarvap film: https://www.youtube.com/watch?v=4E-KFkH_IF4&feature=youtu.be
Solarvap is clearly a renewable solution for Zero Liquid Discharge, as it uses solar heat to produce demineralised water based on brine and wastewater. “In order to be able to use solar steam as the heat source for the pilot plant at Los Frailes, we had to adapt the heat exchanger in the first container,” explained del Prado. “At the mine, we run a two-effect evaporator capable of cleaning 200 litres of wastewater per hour.”
List of solar-heat driven industrial separation processes
“Energy and wastewater management are closely intertwined in manufacturing,” Christoph Brunner, who chairs Task 62 and works as a researcher at Austrian-based AEE INTEC, replied when asked about solar-assisted wastewater treatment. “The members of our research platform have therefore created the first-ever list of industrial separation processes that get their energy from solar thermal systems.”
Rioglass greatly appreciates the knowledge exchange between researchers and component manufacturers in Task 62. “We want to explore new options for using our Fresnel collector units,” said del Prado. Drying sludge is one of these new and promising application areas. An Arizona-based operator of a wastewater treatment plant is among those that asked Rioglass to install a Fresnel collector on its premises. The unit supplies solar energy to heat the earth below greenhouses that dry sludge polluted with ammonium nitrate. This cuts the amount of sludge in half and the water released by the process evaporates into the atmosphere.