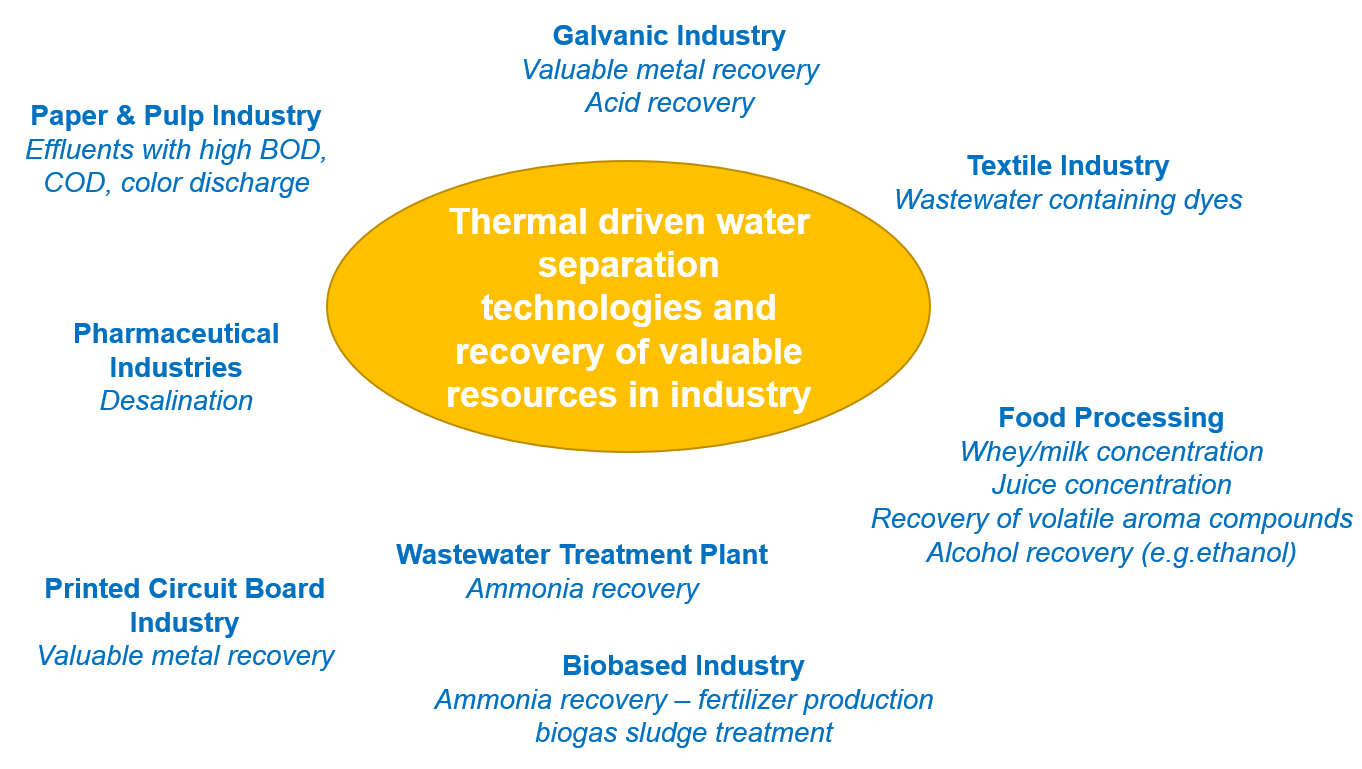 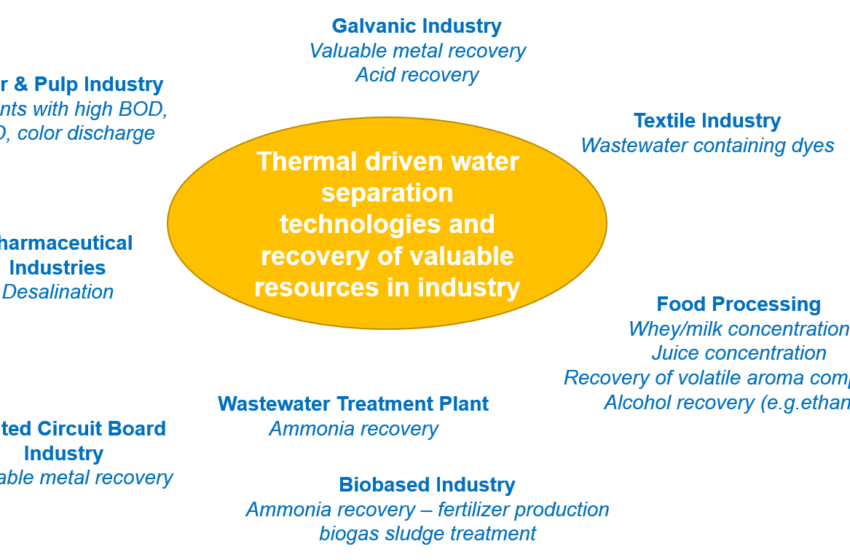 An IEA SHC research group led by Dr Joachim Koschikowski, of Fraunhofer ISE, has created a matrix depicting thermal separation methods for industrial wastewater treatment and resource recovery. As part of Task 62, Solar Energy in Industrial Water and Wastewater Management, launched by the IEA SHC programme in October 2018, the group took a closer look at which industries could benefit from using solar heat to reclaim acid and metals from wastewater streams.
Figure 1: Task 62 / AEE INTEC
“We have so far focused on two pressure-less membrane separation processes. Both are driven by concentration gradients and low-temperature heat. The heat source can be solar or waste energy,” explained Koschikowski. He also manages ReWaCEM, an EU project that saw three demonstrators built to reclaim acids in pickling. One of these was put up at Spanish Electroniquel’s electroplating plant. Usually, plant operators use sulfuric acid to decontaminate metal surfaces in pickling baths via metallic salt formations. But because the acid is gradually being used up, the baths need to be emptied and refilled regularly.
ReWaCEM’s idea combines several separation processes: Following the removal of all metallic salts, the freed sulfuric acid is separated from the wastewater, distilled and led back to the pickling baths. With less wastewater remaining, companies can save disposal fees and extend the service life of baths, as there is no need for frequent liquid changes.

Figure 2: The processes involved in acid and metal recovery at Electroniquel’s demonstration site in Spain. German Deukum supplied the diffusion dialysis unit, SolarSpring the membrane distillation system.
Chart: Task 62 / ReWaCEM
The numbers in figure 2 refer to the different membrane processes used to reclaim acids and metals from wastewater:
1. DD, or Diffusion Dialysis, a pressure-less membrane separation process, is the main method for acid recovery. A DD unit (see fig. 3) consists of a feed (red) and a diffusate channel (green) separated by an anion exchange membrane. Driven by the concentration difference between the acid-rich waste stream on one side and the draw solution, i.e., pure water, on the other, acid ions pass the membrane, while metal salts and other residue are rejected. The process can reclaim as much as 95 % of the acid contained in wastewater. The diffusate is a pure but low-concentration acid. Businesses requiring stronger acids must increase concentration in the stream, for example, via a technique known as membrane distillation (see Step 2).

Figure 3: Diffusion dialysis for acid recovery
Chart: Task 62 / ReWaCEM
2. MD, or membrane distillation, uses a hydrophobic microporous membrane to separate water vapour, as well as other volatile elements, from water mixtures as part of a thermal separation process. Driven by the temperature gradient between its feed and condenser channel, the MD system extracts water vapour from a waste stream to increase acid concentration. The vapour is condensed into pure distillate and re-fed to the DD unit (see fig. 2). This technique achieves up to 3.5 times higher concentrations in the case of sulfuric acids. Due to their volatile nature, hydrochloric acids are only up to 1.5 times more concentrated post-MD.
3. The metal-rich waste stream referred to in Step 1 is then treated in a precipitation reactor, which changes the pH value of the liquid to turn dissolved metal salts solid and separate them for reuse.
“The demonstration systems developed and tested during ReWaCEM have shown much promise and have sparked a drive among not only membrane and component manufactures but also those on the user side, such as metal plating, semiconductor and PV businesses, to find ways to commercialise the techniques,” said Koschikowski. The Task 62 researchers are currently looking to add more options to the growing list of industrial wastewater use cases before creating a report on cutting-edge solutions sometime prior to the end of the four-year project in September 2022.
Organisations mentioned in this article:
https://task62.iea-shc.org/
https://www.iea-shc.org/
https://www.ise.fraunhofer.de/en.html
https://www.rewacem.eu/
https://www.deukum.de/
https://solarspring.de/en/