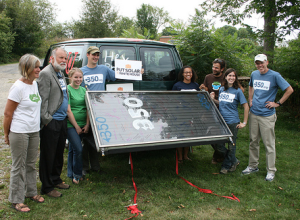 In October 2010, US Energy Secretary Steven Chu and CEQ Chair Nancy Sutley announced plans to install solar PV panels and a solar water heater on the White House by spring 2011. Until now, however, none of the systems has found its way on the President’s roof. And, the Department of Energy has refrained from making any more commitments regarding the time schedule. “Meet Your Solar Deadline,” reminds the initiative 350.org the USA administration and continues collecting signatures for a petition through its website act.350.org/sign/solar/.
Photo: 350.org

According to the organisation’s own press release, 350.org and the network CREDO Action have collected over 100,000 signatures so far, and more than 700 supporters have called the White House directly. Bill McKibben, who founded 350.org and led the campaign, expresses his disappointment as follows: “Well, we don’t have solar panels on the White House, but we do have a better sense of how hard you have to push to get even small changes made. This was a no-brainer – the Republicans couldn’t filibuster it, the oil companies weren’t fighting it, and it still didn’t get done when they said it would.”

There has been a parallel between solar installations on the White House and solar in the US in general. In the late 1970s, President Jimmy Carter had a solar water heater installed on the roof of the White House. It was the period of the oil crisis and the time when the first big solar power plants were being built in the southwest of the USA. But in 1981, Ronald Reagan became president. He had the solar collectors removed five years later. As oil prices went down again, nobody in politics seemed to see a further need for solar technology. The White House solar collectors were given to Unity College in central Maine, at which they have provided hot water for the cafeteria. Also under the Reagan administration, the federal tax credits ran out at the end of 1985, which led to a collapse of the market and a severe decline in solar thermal companies. Contemporary witnesses confirm that 80 % of the industry was gone within one year.

The steep fall: Number of solar thermal manufacturers and distributors which left the business in 1986 after the stop of the federal tax credits.
Source: U.S. Department of Energy / McNeiltech

Obama’s solar policies in mind, one would only think it natural to install a new solar system on the White House. But it took too long for the Obama administration to take that symbolic step. In summer 2010, three students from Maine brought one of Carter’s old solar collectors back from Maine to Washington (see photo on the top). They handed it to the Obama administration together with a petition signed by 40,000 people to install solar systems on the White House again.

Blog of the Department of Energy (there is a comment about solar on the White House in it):
http://blog.energy.gov/blog/2011/06/20/update-white-house-solar-panels-and-our-solar-program

Online petition to put solar on the White House: http://act.350.org/sign/solar/