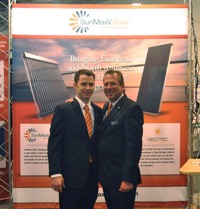 Sunmaxx is a fast-growing system supplier in the States and previously relied on imported vacuum tube collectors from China for its solar thermal system packages. Hence, the flat-plate collectors from Austria perfectly complement the company’s product portfolio. Geo-Tec CEO Mischensky confirms that, the contract names the new founded joint-venture as the exclusive distributor for the Austrian products in the United States. Since July, collectors, tanks, controllers, mounting systems and pre-packaged pump-stations have been shipped to the three warehouses of Sunmaxx in New York, Colorado and San Francisco.

Nevertheless, the new partners see the long transport route between Austria and USA as a great barrier to further growth. They agreed on setting up a flat-plate collector production in North America, at which other solar thermal components will be manufactured, too. “We supply all the technical know-how, including engineering for the planning of the facility ‘made in USA’,” confirms Mischensky. His partner Mike Farrell adds: “We entered into the final stage with the US-wide site selection process for the factory and identified possible locations in two US States.”

Sunmaxx will announce the final location, as well as its entire new product portfolio in the coming weeks. The new product range will also include mounting systems from Austrian manufacturer Mage Sunfixings GmbH. Sunmaxx announced the signing of a long-term cooperation with this company in late August.

Geo-Tec started producing solar thermal collectors 14 years ago and exports its products to over 20 countries worldwide. In 2009, the company manufactured 65,000 m2 of collector area with either ultrasonic-welded or soldered, full-plate copper absorbers.

Sunmaxx Solar launched its solar thermal brand Sunmaxx in 2006 and has experienced strong growth over the last four years. The company focuses on installer trainings. “In the last years, we trained around 3,000 installers nation-wide and we will now incorporate the principles of European system design and engineering into our trainings,” Farrell announces. Sunmaxx runs three training facilities in New York, Denver and San Diego. Trainings are divided into one-day-units from level 1 to 6 and cost between USD 200 (level one) and USD 500 (level six).