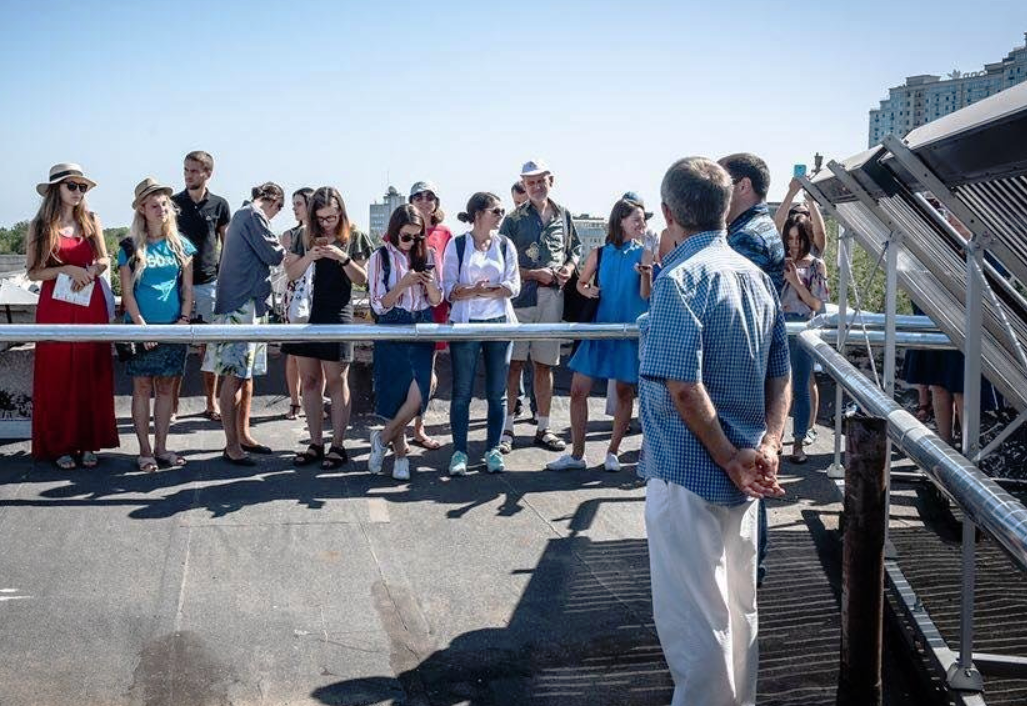 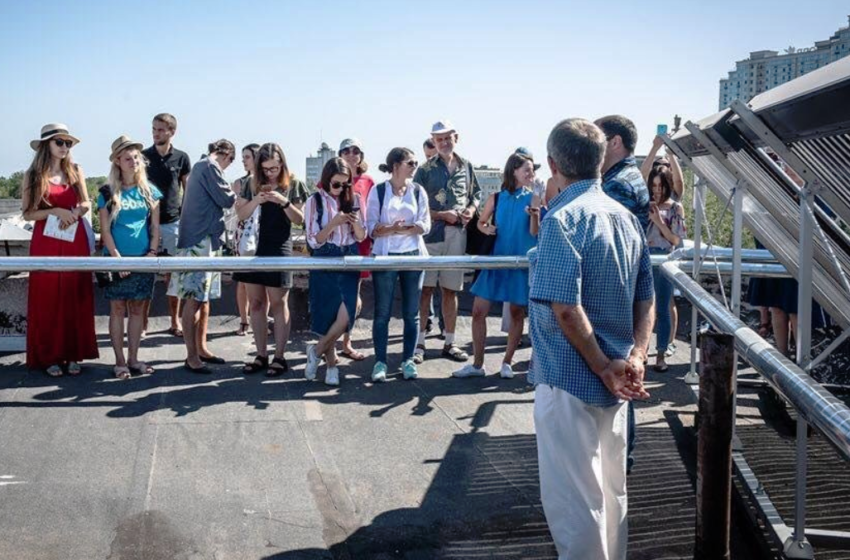 Earlier this year, Odessa Law Academy based in Ukraine bought solar water heating systems for three accommodation buildings to reduce its dependence on gas, which had become increasingly expensive. This is part of the green strategy of the academy. In all, 25 representatives for environmental organisations from across Ukraine visited the solar water heater systems at the beginning of September to learn more about the academy’s green strategy (see photo). In a press release posted to the institution’s website, the eco activities noted that solar heat technologies are economically feasible throughout Odessa, since the region, which borders the Black Sea, offers more than 250 sunny days a year.
Photo: Odessa Law Academy
A Ukrainian installation business named Standard Engineering put up a total of 200 m² of vacuum tube collectors from Chinese-based manufacturer Apricus on site. Two systems were commissioned as early as May; the third and last one was installed in July. The press office of the academy has said that solar hot water systems could soon be added to another two accommodation buildings, which have already been connected to a central, gas-fired hot water installation.
According to Viktor Bodnar, Technical Director at Standard Engineering, the newly installed systems will provide students with all the hot water they need in summer. In other seasons, water will be preheated via the collectors before gas boilers bring it to the required temperature.
The academy’s press office has also stated that the use of solar-heated water will be an attractive cost-saving measure, considering natural gas prices have increased by a factor of 11 over the last five years, jumping from Ukrainian Hryvnia (UAH) 0.58/m³ of gas to 6.45 UAH/m³ (0.02 EUR/m³ to 0.24 EUR/m³).
It is expected that other providers of higher education will now start using solar heat technologies, too. “We want the academy’s initiative to serve as a model for all educational institutions in the country,“ Olga Fursik, a representative for the Kiev-based Ukrainian Youth Climate Association is quoted as saying in an article posted to slovo.odessa.ua, a website for political and social news.
This article was written by Eugene Gerden, a Moscow-based freelance journalist specialising in renewable energies.
More information in Ukrainian:
http://www.onua.edu.ua/index.php?option=com_content&view=article&id=8928%3A2019-09-09-10-52-19&catid=1%3Anewsuniver&Itemid=138&lang=ru
http://slovo.odessa.ua/main/37862-programma-zelenyy-universitet-odesskoy-yurakademii-zainteresovala-ekoaktivistov-so-vsey-ukrainy.html