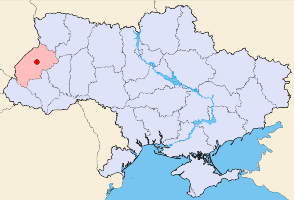 One major growth barrier in the Ukrainian solar thermal market is the usually high interest rate of between 18 and 25 %. Which is why the low-interest loan programme of the Lviv region in western Ukraine marks an important step towards spreading solar energy in the country. Since 2009, Bank Lviv has offered residents across the Lviv region (see red part on the map), subsidised interest rates to finance energy-saving measures, including the set-up of solar thermal systems. 20 % of the interest rate will be transferred back to the customer’s account a month later.
Figure: Wikipedia

It all started after Bank Lviv and NEFCO, a development bank founded by the governments of several Northern European countries, signed a cooperation agreement in the fall of 2007. NEFCO then provided EUR 3 million for loans supporting environmentally friendly projects which save energy and create alternative sources to gas. Both Small and Medium Enterprises (SMEs) and natural persons can apply for the loan. Bank Lviv and NEFCO agreed to run a programme at least until 2012. “The energy-saving programme for Lviv region residents for the years 2009-2012” is managed by the Lviv region authorities with a budget in 2011 of Ukrainian Hryvnia (UAH) 1,150,000 (approx. EUR 101,000).

According to the Deputy Director of the main economic and investment division of the Lviv region, Kuzich Roman Vasilevich, the administration is very satisfied with the programme’s results. He is quite certain that the subsidies will be extended after the planned end of the programme in December 2012. Since its start, UAH 5.9 million (approx. EUR 4.5 million) have already been spent on subsidising interest rates of loans supporting energy-saving measures. A total of 6,260 households have made use of the regional programme so far, out of which 853 families have received a subsidised loan during 2010.

Bank Lviv is one of the seven banks and eleven financial institutions across the Lviv region whose subsidised interest rates have been financed out of Lviv’s regional budget. According to Bank Lviv board member Iryna Zayachuk, the bank is the second most successful institution within the scheme after the State Savings Bank. Since the start of the programme, around 400 clients of Bank Lviv have already benefited from the low-interest loans granted for, among others, solar thermal systems, insulation, and the replacement of windows, frames, doors or electric heating systems.

Only a small number of applicants have purchased a solar water heating system, because the public has still not been made aware enough of this type of technology. Until now, mainly private persons have applied for a subsidy. They usually receive a loan of up to UAH 30,000 (approx. EUR 2,600), albeit larger loans can be obtained on a case-by-case basis. There are two ways to subsidise the interest rate: Lviv residents receive a 15 %  reduction of the current market interest rate in case of energy-saving measures and 20 % of the current market interest rate if applicants use energy sources other than gas. Naturally, solar thermal systems fall under the second category (for more programme details, see the database of incentive programmes).

Bank Lviv has continually tried to extend the area in which people can get access to subsidised loans. The first big success was in the Horodok region in western Ukraine: Residents across Horodok can now apply for interest-free loans if they decide to change to an energy source other than gas. The subsidies on loan interest rates in the Horodok region are financed entirely through the public budget of the region. At present, the bank is also in discussion with the Sambir – Drohobych regions about implementing the programme through local subsidiaries.

“However, extending the programme to other regions is progressing rather slow because of the recently quite frequent changes in government,” Irina Zajatschuk, Member of the Supervisory Board of Bank Lviv, explains. Three parliamentary elections in three years are creating an unstable political situation. “The government instability significantly slows down the whole process of establishing government support,” adds Zajatschuk.