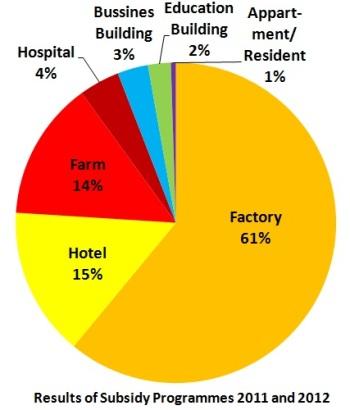 Since January 2013, the government of Thailand has continued to subsidise commercial solar thermal installations which are combined with waste heat from an air conditioner or boiler. The programme has been running since 2008 and phase VI in 2013 is limited to 25,000 m2 (see the database of incentive programmes). In 2011 and 2012, authorities paid out grants for a total of 21,034 m² of collector area. The chart shows the collector area share in different application areas over the last two years. According to the programme’s administrator, the Department of Alternative Energy Development and Efficiency (DEDE), the majority of the subsidies went to process heat applications in the industry, followed by hotels, farms and hospitals.
Source: DEDE

Applications for the upfront investment subsidy have to be submitted by 30 June 2013. DEDE will pay the highest subsidy amount of 3,460 Thai Baht (THB)/m2 (86 EUR /m²) if all of the system components meet certain criteria. The following lists all subsidy rates at maximum levels and in reference to the collector area: