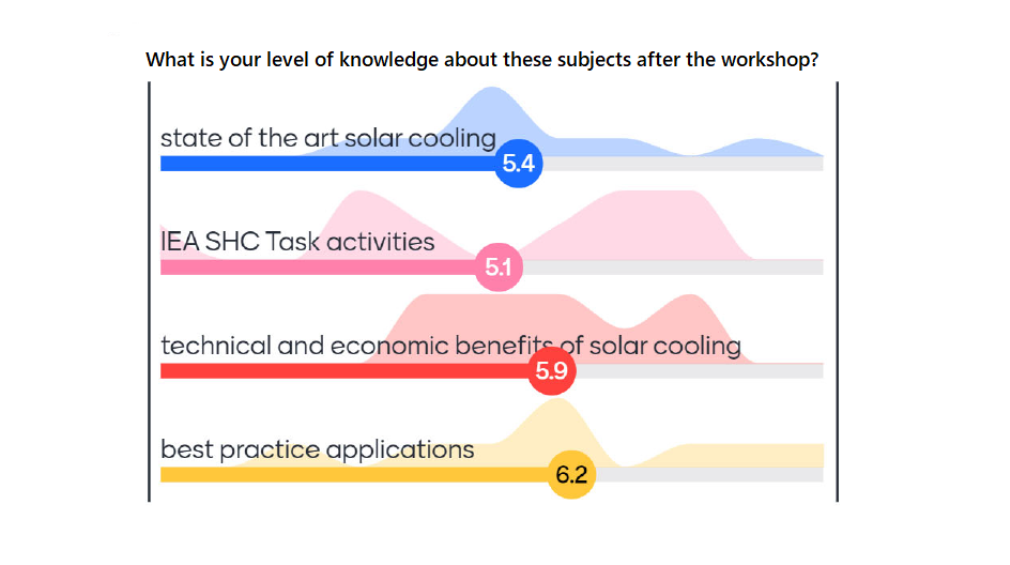 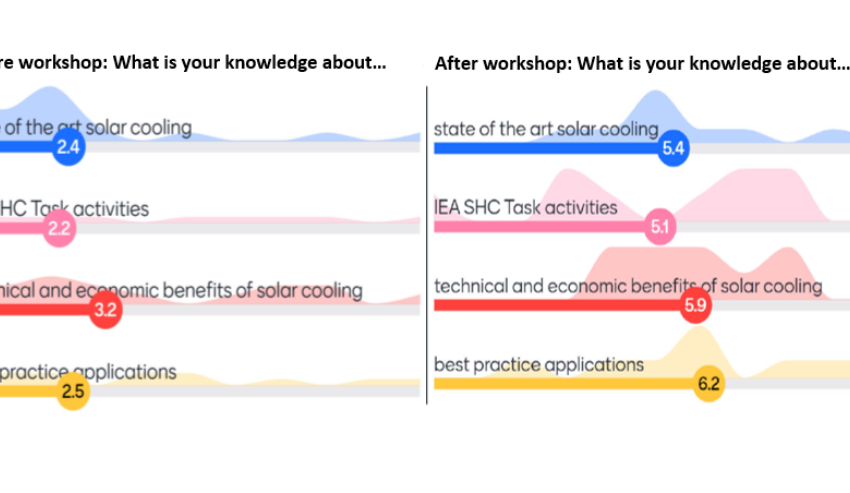 IEA SHC Solar Academy’s first online training sessions on solar heating and cooling in the Caribbean have been well received by those attending the event. About 30 consultants, agencies for energy efficiency and renewables, researchers, manufacturers, grid operator and CCREEE staff benefited from the two-day training course organised by the Caribbean Centre for Renewable Energy and Energy Efficiency (CCREEE), which had joined the IEA SHC programme as recently as this June. An online survey on the second day of the event, when the focus was on cooling technology, found that the participants had increased their knowledge base by two to three points on a scale from 1 to 10 (see the charts above).
Source: IEA SHC Task 65
On Day 1, Werner Weiss, of Austrian AEE INTEC, and Vassiliki Drosou, of the Greek Centre for Renewable Energy Sources, first gave an overview of several solar thermal applications used by families, hotels, hospitals and manufacturing businesses before describing successful implementation strategies, support mechanisms and quality control methods.
Day 2 focused on IEA SHC Task 65, titled Solar Cooling for the Sunbelt Regions, and the state of the art of solar cooling. Daniel Neyer, of Neyer Brainworks based in Austria, and Uli Jakob, of German-based dr. jakob energy research, presented basic system functions and trends in solar cooling, economic and technical assessments, and best practices.
“CCREEE did a great job of organising the training. Despite the event being held online, attendees were very engaged, which prompted many in-depth discussions,” said Jakob. One benefit of solar thermal cooling, as relayed during the sessions, is that it can reduce the strain on power grids, an especially important factor on islands that have capacity problems. An attendee who works for a grid operator said: “If PV or wind generators are connected to the grid, weather conditions have an immediate impact on grid stability. As soon as a cloud covers one of the smaller islands, electricity demand can grow within seconds. Solar thermal cooling could help lessen the effect of that.”
Solar thermal cooling reduces strain on the power grid
Of particular interest to attendees was also a case study that looked at the technological and economic aspects of installing solar thermal heating or cooling systems in the Caribbean. The IEA SHC experts provided a corresponding calculation example during one of the sessions, a hybrid cooling system for installation on the island of Barbados. It indicated that the payback period for the system was less than seven years at an internal rate of return (IRR) exceeding 13 %. “For this study, we selected a 75 m2 field of flat plate collectors that would drive a 15 kW ammonia-water absorption and a 15 kW ammonia vapour compression chiller in hybrid mode. The absorption chiller would deliver chilled water at 6 °C as soon as the amount of irradiation on the collector exceeds 200 W/m2. The vapour compression device, on the other hand, would meet remaining demand if necessary. This system could be used for small office or residential buildings,” explained Neyer.

Major elements of CCREEE’s current work programme
“We received a lot of positive feedback from attendees so we are now exploring what other training opportunities we could make available in collaboration with IEA SHC Solar Academy,” noted Cornelia Schenk, CCREEE’s Energy Efficiency Division Leader. CCREEE is a fairly new but fast-growing organisation that serves all 15 member states of the Caribbean Community, also known as Caricom. Founded in May 2018, it already engages 10 staff as well as several interns.
A high point of CCREEE’s current programme is the Caribbean Energy Knowledge Hub (CEKH), which is planned to provide a wide variety of data sources, including studies and reports. “We have sent a request for publishing certain types of documents on the CEKH and we are now reviewing what has been submitted to us,” said Schenk. The CEKH is scheduled to come online this December.
In addition, CCREEE has started a Project Preparation Facility (PPF), with the aim of developing business models that would make clean energy or energy efficiency projects bankable. “A soft launch of the PPF is scheduled for 25 November with some initial seed projects. We are planning go into full implementation in April 2021, following a validation period,” explained Schenk.
CCREEE is part of GN-SEC, the Global Network of Regional Sustainable Energy Centres, which have or will gradually become members of the IEA SHC programme.
Organisations mentioned in this article:
https://task65.iea-shc.org
https://www.iea-shc.org/solar-academy
https://www.ccreee.org
http://www.drjakobenergyresearch.de
http://www.neyer-brainworks.at
https://www.aee-intec.at/index.php?params=&lang=en
http://www.cres.gr/cres/index_uk.html