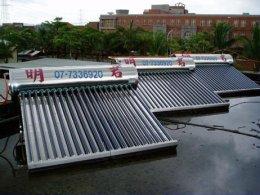 After the boom year of 2010, the latest market research from the Taiwanese National Cheng Kung University (NCKU) shows a strong decline in the Taiwanese market in 2011: With 116,000 m2 of newly installed collector area, last year’s figures were back to the level of 2009. The regional subsidy programme of the government of Kaohsiung city caused the 2010 sales peak of around 140,000 m² – before the programme ran out at the end of 2010. The authors of the study counted a subsidised 8,391 solar water heaters with 43,235 m² of collector area that were subsidised through the Kaohsiung city programme in 2010, 56 % more than in the previous year. This led the authors of the study to the conclusion that the “current national subsidy programme has recently lost its momentum in terms of expanding the market. This makes it all the more important for regional subsidy programmes to become the main force in growing sales.” NCKU´s 2012 market report is still under review and has not yet been published officially (find NCKU´s 2011 market survey attached below).
Photo: Appropedia

Prof Keh-Chin Chang and his team from the NCKU’s Research Center for Energy Technology and Strategy justify their conclusion by suggesting that the national and the regional subsidy programme could be combined. This means that a homeowner who purchases a solar water heater first receives a grant of New Taiwan Dollar (TWD) 2,250 per m² of collector area from the Taiwanese Bureau of Energy, Ministry of Economic Affairs, BEMOEA. This subsidy covers around 23 % of the investment costs. If the buyer had lived in Kaohsiung city, the municipality would have paid an additional 2,250 NTD/m² between 2008 and 2010, which provided the end consumer with a funding of around 50 % of the investment made.

Kaohsiung is the second largest city of Taiwan. It is located in the southwest of the island and has a large port area. The municipality, which started subsidising solar water heaters on 1 September 2008, is on its way to becoming the most sustainable city across the island. Between 2009 and 2011, there were 18,283 new solar water heater units installed throughout the city – the highest share of all counties and cities in NCKU´s market statistics.

The report of the National Cheng Kung University also analyses the share of vacuum tubes on the market that has increased from 5 % in 2000 to 15 % in 2011. The residential sector is by far the dominating force on the solar water heater market and almost all residential systems use thermosiphon technology.

The authors of the study noted that solar water heater market volume strongly depends on the state of the construction sector. The decline in the construction of new buildings over the last years certainly has had a negative effect on the solar thermal market. Prof Chang, Director of the NCKU’s research centre, says notes in the latest report that in 2010, every forth housing unit had been vacant: “This means that even with the current subsidy programmes, it will be very difficult to expand the local market in the domestic sector”. There are very few solar process heat applications besides residential installations. The lower – subsidised – electricity rates for the industrial sector make commercial solar thermal systems simply too unattractive. Between 2000 and 2011, only ten new industrial solar thermal systems were installed per year.